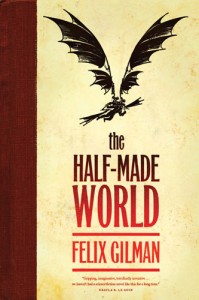 Most people buy books on the recommendation of people they know. This is because so many books are crap. You need somebody to take that first hit for you. Somebody’s gotta take the  chance on buying a $25-30 hardcover to make sure it doesn’t suck.

I picked up The Half-Made World on recommendation from @MadHatterReview. I was looking for books with strong female characters and great world building.

And that’s just what I got.

The Half-Made World is a steampunkish tour of a world in a constant state of making. It takes the “new world” of the frontier and makes it literal. Head west far enough and you really will get to the edge of the “made” world. The world is in a constant state of literally making, of being named, and the further west you go, the faster it starts to unravel.

Two warring factions are battling for control of the new world: the Line and the Gun. The Gun and the Line are led by monstrous demons that inhabit made objects – guns and engines, respectively. The Gun employs solitary gunslinging super agents, whereas the Line eats up the world with progress – noise bombs, filthy cities, oil-hungry machines and contraptions.

Into this literal wild west comes Dr. Liv Alverhuysen, searching for purpose, adventure, and (like most psychiatrists/psychologists) some measure of her own sanity.

We follow agents of the Gun and the Line in their pursuit of a missing general of the Red Republic, a rogue group of idealists who tried to fight both the Gun and the Line for their independence 20 years before. They believe in things like equality and democracy. Added into the mix is a fourth group of folks with an agenda, the First Folk – the people who live comfortably in the unmade world and were there before anybody else.

Now you might be starting to see why things broke down here for me. This is a great story – agents of the Gun and the Line and Liv all converge on the hospital where this missing general is purported to be, and there are battles and things and lovely worldbuilding and imagery. But the biggest drawback of the book, for me, was the wild west made literal. It all felt *too* wild west. Not particularly romanticized, as steampunk has been accused of being, but just sort of falling down under the weight of its own metaphors. The fact that everything in the book reminded me of some real-world counterpart was kind of annoying. It kept popping me back through the fourth wall and slapping me in the face. Every time I’d get digging back into the book, it’d do something that went, “See, it’s just like Indians!” or “See, it’s just like industry eating up the glorious old west!” and I was like, “Gah, please, if I wanted a wild west travelogue, I’d read one.”

It also starts to lose steam about 3/4 of the way through as Liv and one of the agents of the Gun track on west and west and farther west. The whole thing goes on far too long. And though I loved the world building, that, too, seemed to break down during the long trek west.

The biggest disappointment in the book, though, was that in the end, the McGuffin remains a mysterious McGuffin, presumably for revelation in some later book? Which was the biggest cop-out. You expect to find out what the general is hiding, or just have him die before revealing it, but it’s like neither really happens. Instead we get sent off to some other-thing to do some other-quest for book two. I found this deeply unsatisfying. The only book I’ve ever thrown across the room is The Mirror of Her Dreams. Why? Because Donaldson literally stops his book mid-book, at the end of some random chapter. He simply took his big book, cut it in half at some arbitrary place, and published it. Talk about disappointment. I never did bother to read the other one. Plus, the heroine was annoying.

Now, that’s something I can’t say about Half-Made World, which had three interesting, complex, broken, messed-up characters. Even the secondary characters were well-polished. I loved everybody in their own way. Liv is one of those strong heroines that gets stuff done without being violent (not until the end anyway), and it really works for her. She was beautifully drawn and executed, as was Creedmoor, the agent of the Gun, who we spent the second most time with. They are perfectly complex in that way that makes you not quite sure what they’ll do next, but knowing that when they do do it, it’s perfectly in character.

Anyway, this is sort of a rambling rant, so I’ll end it there. To sum up: a lush, enjoyable little book with some wild west metaphor problems.