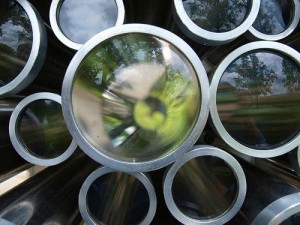 When I first starting writing (yanno, back when I was twelve), I didn’t know much about writing point-of-view (POV), so everything was just omniscient, the way it seemed to be in most myths and fairytales and a good deal of older movies with narration attached. The narrator could just tell you what everyone was feeling, and wax on about the history of the world, and it was great.

But as I got older and started paying critical attention to what I was reading, I learned more about POV. What I thought I was writing, it turned out, wasn’t what I was writing. In fact, it wasn’t so much omniscient as it was just head-hopping between characters with no real transitions (or method to the madness). I was relating things as they occurred to me, instead of as they occurred to the characters.

Like most folks these days, I eventually fell into the rhythm of first person and close third person, and started using scene and chapter breaks to distinguish between POV shifts. It was easier this way – a lot less messy than mid-sentence head-hopping or the kind of overaching historian-as-narrator with third person style that I do hope to achieve one day for some epic project.

But with the last couple of books, sticking to close third POV and forcing myself to switch chapters every time we switch POV characters got frustrating, and made pacing really, really difficult. I broke this a couple of times with switches within chapters indicated with scene breaks in INFIDEL, but it didn’t happen often, because I was really on edge about doing it. Looking back, I’m kinda pissed that I hadn’t worked in this angle earlier in the last book, particularly there at the end during a climactic scene where we really, really needed a Rhys POV in there so he could get some closure (and to act as a nice setup for some stuff going on in book three that I’m writing now). But, alas, I chose to stick with a Nyx POV throughout, and now I regret it.

So this time around I’m working on putting together a more fluid POV experience, because I believe it will make for a more powerful and engaging book. The idea is to build the main-and-sub character POVs into earlier chapters, and then start head-hopping-with-scene-breaks instead of chapter breaks during select scenes so I can hit climactic scenes from multiple angles. Nyx is a tough character to get a handle on because she’s cut herself off so much from people, and human stuff like… feelings. Writing too much Nyx all at once gets really distancing and depressing for me really fast, and I imagine that if I wrote a whole book from a Nyx POV, a lot more readers would be throwing these books across the room in frustration.

Though there are plenty of books that do this amount of head-hopping, my template for this approach right now is actually Joe Abercrombie’s Best Served Cold. I’ve gone on about this book a lot, because it achieves a lot of what I was hoping to achieve in the first Nyx book when it comes to plot and POV. I’m not a fan of what I call “fan-fiction-y” moments, that is, when characters go on and on for pages just being themselves without advancing the plot, but I recognize that it also humanizes the characters and makes them a lot more lovable (even the shitty ones) than they would be otherwise. More than that, though, head-hopping during climactic scenes makes for a far more suspenseful read than just narrowly sticking to one viewpoint.

The key to viewpoint is to tell each scene from the perspective of the person who hurts the most. And when you’ve got a scene stuffed with different pain points for different characters, the head-hopping just makes sense. The tough part is successfully moving POV’s without losing a reader’s focus, or sacrificing pacing. If your whole book is Nyx/Rhys/Nyx/Rhys/Nyx/Rhys and all the sudden you’ve got a chapter with Nyx/Rhys/Inaya/Eshe/Suha/Anneke viewpoints, that’s a problem. So there’s a plot and pacing thing I need to address as I go along.

This requires a lot more planning than I’m used to, but if I do this right, RAPTURE is going to be much more the sort of book I envisioned GOD’S WAR to be than the one I actually got. Not the GW is all bad, mind, it’s just… different than what I expected to put together.

My goal with each book is to become a technically more powerful writer with every one. That means getting better at everything, not just the stuff I’m bad at (like plot and grammar), but also the stuff I’m good at but could always be better at (setting, characters).

I think there’s this odd expectation in some circles that once you publish a book, that’s it. You’re just going to coast on now writing the same way you always did, and you don’t have to push or improve or anything. For better or worse, it just doesn’t work that way these days. Aside from the personal drive to be better, there’s also a big professional one. Publishers are dropping authors and books left and right, and everybody’s looking for that “breakout book” – the one that gets you from selling 5,000 copies to 50,000 or 100,000 copies. If you’re not getting better and growing your audience, then get ready to change your name or switch to a really small press. That’s just the reality of the biz these days.

But, hey, on  the upside I have no interest in writing the same book over and over again, and I enjoy getting better, that that works for me. That’s another reason this is the last Nyx book (oh, I’m sure they’ll be some free shorts in the future, but I’m done with Nyx at length). When you’ve learned all you can from one project, it’s time to move on to the next…. and I can’t wait to apply all the stuff I’m learning while writing these books to my next project.