When you’re told that all of your friends are out riding Falcor the Luck Dragon to Disneyworld, where they will stay in Cinderella’s Castle and eat bon-bons all day while getting escorted to the front of every line via air-conditioned pumpkin carriage, it’s really, really hard not to go with them, even though you know Florida is really hot, you don’t really like bon-bons, and you know they only ride the rides you don’t like. Because while you’re sitting at home, looking at your sales numbers and calculating the cost of car repairs, you’re stuck reading their tweets about six figure books deals and interviews with the New York Times. And that’s when you start to question your writing choices.

Wait, did I drop the metaphor, there?

In fact, I’d love to fast-pass a Disneyworld trip and stay in Cinderella’s Castle. But I won’t be writing a YA or MG novel to get there. Why is this? Do I hate teenagers? Do I hate children? Am I one of those elitist snobs who thinks YA is mindless teen twaddle? Am I allergic to money? 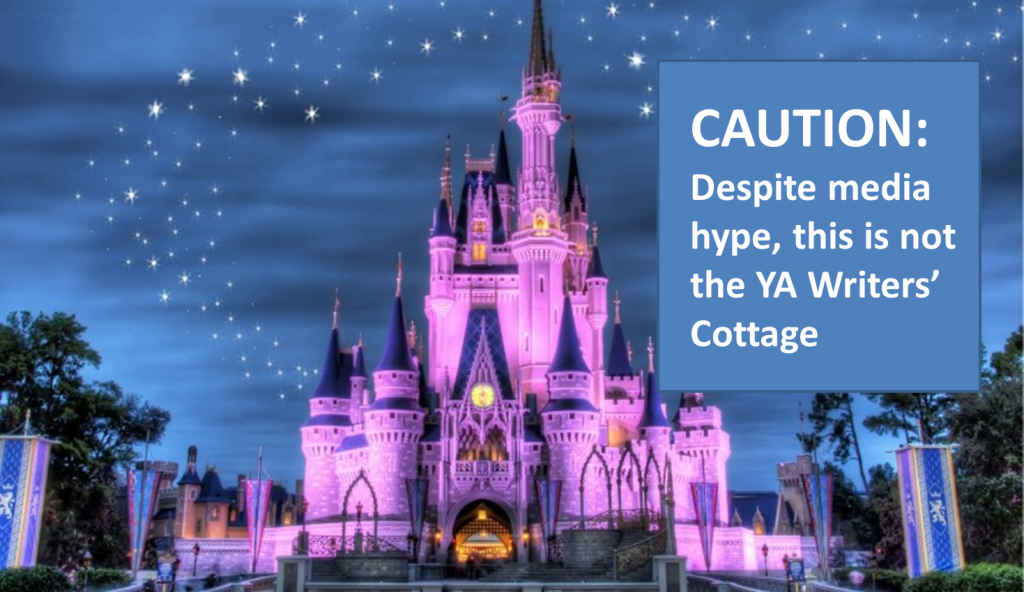 Not at all. In fact, I’d be among the first to say that there’s a lot of exciting work being done in YA by a great number of talented people. The Harry Potter books kicked off a renaissance in YA literature, and as advances for adult literature were bottoming out, YA was still paying pretty well. No doubt there are many people writing YA because they simply love the genre. As an added bonus, it also pays better than a lot of adult lit, though the field is starting to get a little bit glutted due to the gold rush. The other great part about writing YA is that you can write 3 books a year at, say, 70K a piece and get paid better than most 210k epic fantasy novels.

When I look out at YA, I see an Alaskan gold rush, with a lot of writers vying for a large but ultimately finite pie. And, of course, as more writers write YA, you get more competition, and you have to work a whole lot harder to stand out.

But none of that is why I’m not writing YA.

I’m not writing YA because for the most part, YA stories just aren’t for me.

There are some great YA novels. Wonderful stories with great characters and settings and interesting premises. I’ve even read a few here in my 30s. But as I’ve gotten older, I find myself less interested in the sort of identity-forming stories that YA tends to be about. I was pretty much done with my journey-toward-adulthood after my roaring 20’s, when chronic illness hit and I started figuring out how to be a grown up. There was this bending in my brain where I realized that in order to survive, I needed to give up being a selfish teenager and become an adult. And I found myself with a lot less patience for teenage characters. I wanted to read about people who have to juggle their yearning for freedom with adult responsibilities and concerns, and who do it all in really wacky worlds. If more modern YA was written like Melvin Burgess’s Bloodtide, I’d probably read more of it. But it’s not.

And you tend to write what you want to read.

What got me to thinking about this was this article about why adults read YA novels. I’d been asking myself the question a lot, so it was a really interesting rundown. As I went through the reasons folks gave for reading YA, I realized that I didn’t share any of those. So it made sense as to why I didn’t read a lot of it. Most of it just wasn’t for me. I tend to like long, very weird and worldbuild-y fiction that’s very cynical and a little dark. I’m also less interested in origin stories and characters exploring their options and identities and more interested in playing with characters who’ve been boxed into the routine of adulthood and now have to unbox themselves to survive. I do like fast-paced fiction, but not at the expense of the depth of the worldbuilding or lush writing. And with all that worldbuilding, well, what I like tends to be less accessible than a lot of YA, too.

In writing my current book, some of the most excrutiating parts for me to write were the POVs of the younger characters – my fifteen, sixteen, and nineteen year old protagonists – who were indeed struggling with issues of identity, clashes between hopeful youthful yearning and despair, and building their origin stories. Instead, what I found fascinating was building the older, broken, despairing characters who’d built the world they were now expecting these kids to fit neatly into. The clash, of course, comes as some of the older folks are trying to move one another and the younger characters around on a game board that others are rapidly trying to dismantle. The fun stuff was watching how people developed and justified their own sense of morality in a world that’s falling apart around them.

One of the things I’ve been very conscious of in my writing is trying to create better plotted and more accessible stories without sacrificing all of the things I love about writing dark, weird fiction. It’s been a special sort of balancing act, and I’m not sure I’m getting any better at it, but I’m hopeful.

So as much as I’d love to get on the YA carriage, I’d end up being somebody who did it for the money and not because I loved it. And let’s be real, my friends: I have a day job where I already write things for the Big Money. And giving up my weird fiction in an attempt to follow a marketing category I don’t love that may be over tomorrow… nah. Just not worth it to me.

That said, I admit that every tweet about how my friends are all out eating Mickey–ear-shaped caviar with Captain Jack Sparrow and Goofy still hurts, and makes me wish that Bloodtide hadn’t already been written.

But if you don’t like caviar, you shouldn’t be eating it, even if it’s shaped like Mickey ears.

Now I want some Mickey waffles.