Genderblindered: “We’re both queens. So who will hang out the laundry?” 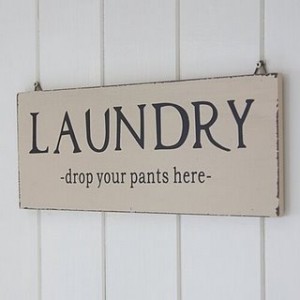 I read an old proverb once that went, “We’re both queens. So who will hang out the laundry?”

I think this is an important point that a lot of seemingly imaginative fiction fails to take into account when creating societies.

I was on a panel about women in combat at Epic Confusion when Scott Lynch brought up the fact that he often wrote in female guards and background characters in traditionally masculine roles without making a big deal about it. The idea was, to paraphrase, that equality was just something that was in his world, and the role of women in these positions went unquestioned in the society, and thus, in the book.

This is actually a more-or-less common thing for folks to do in SF in particular (and even in some noteworthy fantasy like Lynch’s), but it’s been nagging at me for a while. I mean, “everybody’s equal” should be a positive thing, right? Women can be soldiers and shopkeepers and boxers and bankers. How many people, day-to-day, reflect on why it is that women in our society hold those positions (or even question why they hold them in such fewer numbers than men, or why they’re paid less for them)? Oh, sure, there’s a long, turbulent history of women fighting for the right to hold those positions at all, but it’s not generally something that’s on everybody’s mind as they go about their business.  And ya’ll know I’m not the one to say we need more infodumping in fiction. So it’s cool.

But. Here’s the thing. It’s actually a bit blindered. It’s focusing on about 52% of a world’s population and how they comport themselves. And it ignores how the other half of that society is going to have to change even in the face of the kind of uneasy, tepid, on-paper-equality we have in the U.S. Cause anybody can tell you that as the expectations for what women did, and could do, have changed even in our own country, the expectations of what men were suppose to do, and expected to do, have changed, too.

See, if you’ve got a society that’s truly, really, totally “equal” you’re not just going to have women guards, lawyers, and bodyguards. You’re also going to have an equal number of male child caretakers, kindergarten teachers, nurses, secretaries, receptionists, sex workers, and housemaids (unless you have cunningly created a society that doesn’t have sex work, and if it’s truly equal, I can tell you that it probably won’t. But that’s another rant).

“Equal” societies aren’t just about putting women in armor and calling it good. It’s about totally breaking down the assumptions of gendered work – for everyone – and rethinking, from the ground up, how that society builds, organizes, reproduces, communicates, and even what it dreams about.

More likely, what you’re going to see in more-or-less equal societies created on paper is that somebody is being oppressed to allow another subset of people to be “equal.” So if women are bodyguards working twelve hour shifts, somebody else had better be running take-out food stalls that feed them, the creches that care for their children, and the stores that do their laundry – or you need to have some really advanced technology that takes care of all of that.

If men and women aren’t sharing work, then they’re likely fobbing it off on somebody else – whether it be service-oriented businesses or slaves or servants (and if if they’re doing that, sure, you may have a society that doesn’t have specifically gendered work, but it’s certainly not a society that’s “equal”). Or everybody pays in to have the state take care of their kids. Or they create houses that clean themselves (the old “technology will make us equal” thing).

I do get annoyed in conversations about casual equality in fantastic societies, because they tend to focus on what women need to do to be equal. Equality just means that women will be stronger and better educated and get better jobs, right? They’ll be real people – just like guys! Like everything else, we measure the oppressiveness or openness of a society based on “what women are allowed to do” instead of what the people are free to do.  It glosses over just how massive the change will be.

But what isn’t addressed is that in order for this to work, the men in these societies will have to change, too. Cause if everyone is equal, somebody is losing power and privilege. And that’s going to piss some people off.  It’s why things aren’t equal today, because the folks who used to have unquestioned power are very well aware that they’re slowly but surely losing it, and they’re fighting it tooth and nail.

There are all sorts of ways to construct the social dynamics of societies, many of them with real current and historic examples, which is why I’m often so disappointed that in a book that spends three years trying to get its science right, the woman’s in the kitchen barefoot and pregnant while her husband reads the news in their two bedroom, two bath future-condo.

There’s a great article on the changing expectations of fatherhood just in the last couple centuries, including some alternative child caring expectations in other societies (yes, societies here on EARTH, even!) that should at least get folks to thinking about how things have been and thus, could be different.

I mean, you guys – we’re writing/reading fantasy, OK? There is absolutely no excuse for things not to get out-there-crazy fantastic. Including your effing family and gender dynamics.

It’s not just about changing our conception of what women’s work is, or what women’s place is or women this, women that, wear this, wear that. Because I can tell you, after spending several years hip-deep in Abrahamic religions and people’s interpretations of them, I’m kinda bored with seeing societies who overly focus on and define themselves (and are outwardly defined by others) entirely on the appearance and conduct of the women within those societies.

Innovative worldbuilding is about asking, really asking, what it means to be a man in this society too, and what exactly constitutes men’s work – if there is such a thing.  What can men wear? What can they say? What jobs can they hold? And… why? If you’ve got gendered work, there should be a good, non-cliched reason for it. If you don’t, great.

But when you finish writing a book, or reading a book, you should have a good idea of who’s hanging out the laundry.