Is Becoming a Pro Writer Worth it?

I spend a lot of time talking craft and word count and publishing as a business online, and I do my fair share of exhausted-tweeting, like last night when I sat up until 10:30 signing bookplates for newsletter subscribers. Or on Saturday when I squeezed out my 5,000 words for the week in one go, annoyed that I hadn’t hit my goal of 10,000 because I desperately needed to sleep. I subtweet about lawyers and contracts on occasion, and talk far too much about marketing and how to build promotion calendars and improve craft. I’m tired, quite often, and I let people know it.

All my yakking led someone on Twitter to ask if becoming a writer was “worth it.” And, you know, I was stuck for an answer at that point. I said, “Ask me again when I’m 60.”

But I that answer doesn’t get to the root of the question, which can’t be answered until we know what “worth” is supposed to mean, here.

I’ve spent just over twenty years now sending out short fiction for publication. I started attending writers’ workshops for teens at fourteen, which is the same time I subscribed to Writer’s Digest. I just turned 35, and as of now, I’ve had four novels and ten or twelve short stories published. So I’ve been doing this a long time, without, maybe, as much to show for it as you might think, considering the long crawl here and how I still have to have a day job in order to eat.

But as I was sitting at the dining room table last night, assembling swag bags for my mailing list subscribers, I thought, if I wasn’t doing this, what would I be doing?

I mean, if I chose not to be a writer, would I be curing cancer? Would I be an EMT? Would I have invented a cleaner source of energy?

The reality is that I never aspired to do any of those things, and I certainly didn’t attempt them. I didn’t take the same joy from the idea of becoming an EMT as I did from the idea of become a writer. This is what I always wanted to do. For awhile I considered being an astronaut, or going to vet school, but those were pretty short-lived kid aspirations, the things you come up with because people always asked.

So when people ask me if writing is “worth” it I have to ask, worth what? I gave up everything else to pursue this, sure, but I could do that because I didn’t want anything else as much as I wanted to be a writer. Not kids, not relationships, not some other profession. This was all I wanted. End of story. Anything else I got on top of this was a bonus. 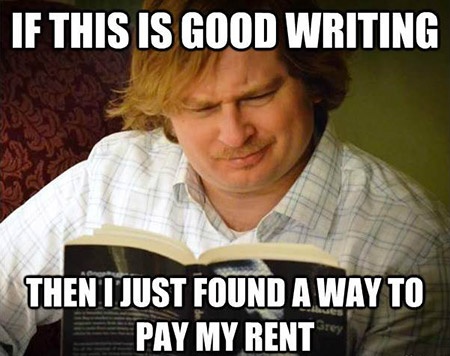 If I wasn’t up last night fulfilling goodie bags for newsletter subscribers, or if I wasn’t spending 5 hours at the coffee shop on Saturday writing 5,000 words, what else would I have been doing? Curing cancer? Or watching Hot Tub Time Machine?

Our culture values “free” time more than anything else, mostly because then we feel obliged to fill it with stuff we can buy, like movies or games, or we spend it, increasingly, yakking at people on Twitter or Facebook, which then monetizes our yakking by selling ads so we will buy more things we don’t need. And if that’s how you spend your free time, if you have any, then what does it hurt to spend your free time writing novels and working on fan projects instead? It costs you, and the world, absolutely nothing. In fact, I’d argue that for the vast majority, it pays off far better for your mental health to be a creator rather than a pure consumer of goods.

“Being a writer” is how I choose to spend my time. Other kids in school had hobbies. They went out drinking. They went to night clubs, later. They watched movies at each others’ houses. I went home and wrote books, because I enjoy it. And the reality is, that because I’m not naturally good at writing a story, I’ve have to spend a very long apprenticeship figuring out how to write things I like in a competent way and then figuring out how to entice people to read it.

These are the choices. They aren’t hard choices (I know what I want) so much as they are annoying choices, because I have to keep making them over and over again.

Of course the meals will need to be made, and the dogs washed, and the laundry done, and the day job hours logged, but when I have down time, why not make something instead of just consuming it? Why not leave something behind me in this world, something tangible, instead of just a littered path of takeout wrappers and Netflix passwords?

Is trying to become a writer worth it?

Well, worth what, exactly?

That’s the question you need to ask yourself. If you don’t know the answer, and you can’t make the same choice, again and again, then rethink what you really want to do with your life. Because if you’re like me, and you want this badly enough, and you’re not super talented, then you’re going to need to work very hard for it. You will always need to choose this. On the best days. On the worst days. Every day.

So figure out, right now, not if it’s “worth it” but how much being a pro writer is “worth” more to you than some other thing – including just being a hobbyist writer.

Because if you have any other hobby or professional that’s worth more to you, is more enjoyable, more fulfilling, I’d go do that instead.