Ponies for Everyone: Scrubbing Women from My Little Pony Fandom

So I’ve been wanting to address the entrance of dudes into My Little Pony (MLP) fandom for awhile now. I’m a fan of lots more fans in a fandom, especially a traditionally female one. It’s awesome to see guys excited about a show that’s about friendship and magic. The more the merrier. Yet, like any other woman-loved-fandom or job-traditionally-held-by-women that suddenly interests dudes (computer programming, anyone?) I can’t help but get a chill every time somebody conflates My Little Pony fandom entirely with dudes.

But the headline introducing the giveaway and event centered around it? It reads:

Calling all Bronies! Forbidden Planet will be hosting a celebration of all things My Little Pony on Saturday 14th September.

I almost cried when I read this.

Here was this fandom that I had to keep hidden for much of my life, because it was “too girly.” Because talking about it made me feminine, and therefore weak, and I didn’t want to be like any of “those” girls. Every time I brought it up, dudes made these assumptions about me. They teased me mercilessly. It was a kid thing, but more than that, a girl thing, and like all of my girl things, needed to be boxed up and Never Spoken About Again.

But I carried on, because dammit, pretty rainbow horses made me happy. I kept my collection of ponies all through my teens and started rebuilding and enhancing my collection via eBay in my early 20’s. In my mid-twenties, I joined the pony-customizing crowd, and started creating pony mods like this: 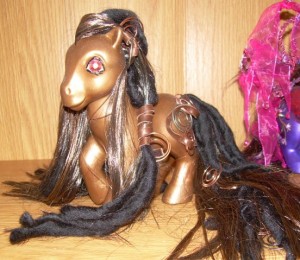 I didn’t talk about this fandom very publicly. Once or twice, I made a blog post showing my old mod workshop, since that was taking up a lot of time, but that was it. I created another, anonymous, email address where I lurked on the My Little Pony Arena, an area where fans bought and traded MLPs. I connected with some other fans, I bought and traded ponies. I displayed my ponies and mods at home. When I moved into my new house, I had to box them up until I created a space for them.

In the meantime, the new MLP cartoon: My Little Pony, Friendship is Magic was taking off in a big way. I didn’t think I’d like it as much as the show I grew up with, because to be honest, with all the witches and lava and creepy crooners and black magic, the 80’s version always seemed darker and creepier to me, even if the songs were nuts, and folks know I’m a sucker for that. But when I finally watched the new cartoon, I found that it was really well done. The characters were great and the writing was amazing. I was happy to see that the show was drawing a whole new glut of folks into My Little Pony fandom.

To my delight, the show was such a hit that the media started running stories about it, and MLP fandom, in a big way.

What I didn’t expect was that the media would concentrate not on the droves of (still primarily women and girls) who liked the new My Little Pony show, but the men who also openly liked the show. What I didn’t expect was that this marginalized fandom with tiny cons that drew maybe a few hundred people a year was suddenly going to be legitimized now because now *men* said that they watched the show and collected the ponies. 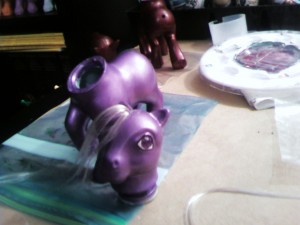 But the real blow, the last few years, has been watching women erased from the popular narrative of the fandom all together. The media glommed onto dudes so quick that folks tend to assume that what you actually *call* a fan of My Little Pony *is* a “Brony.” (at that link you’ll find dudes must insist that they are not “gay” but “normal” [sic] and that the reason they like the show is that, unlike the crap in the past that girls liked, this one is GOOD and not “overly girly.” Watch the distancing happen! This leads to the fears I have expressed later in the post)

And this, I realized, is what dudes are afraid will happen to “their” fandoms when women enter them. They’re afraid that – as happens with every other thing that once belonged to women and then interested dudes and then suddenly that thing became dudes-only – will happen to them when women come in. They’re afraid that one day they’ll look up and everyone will be talking about and interviewing only women science fiction writers and fans, or only women game writers and women fans. They’re afraid women will do to their fandom what they’ve done to ours (and our professions) for yonks.

This crazy logic also makes me want to cry, because it ignores the power differential at work here. Having men in a fandom *legitimizes* that fandom. Having women in a fandom that still has men in it just means you’ll sell more shit. But having *mostly women* or the *perception* of mostly women in a fandom does indeed mean a loss of respect; your fandom is taken less seriously, even if it sells like hotcakes and makes lots of people lots of money  (romance genre, fan fiction, anyone?).

This is because of sexism (shocker, I know, but sometimes you have to spell it out).

So what you should really be fighting, you know, isn’t women in your fandom (or dudes).

Because what ends up happening with a fandom (or a job trade) that men want to have more respect for following? They start to push the women out of it, so it gets taken more seriously. Instead of addressing the sexism and saying, “Hey, we can all like this thing and it’ll be great!” what you start to see is dudes shoving out the women who were there all along. “You’re not a REAL fan. You don’t make MLP VIDEOS or MLP PORN so you can’t be a REAL fan.” (or whatever) Sometimes it’s not even the male fans. It’s the media building a perception that something is “for boys” or “for girls.” And then women voluntarily walk away because they don’t want to deal with the shit they’ll get for trying to do something that’s “for boys.” 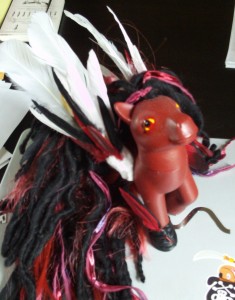 Now, I’m not saying that’s what’s going to happen. My hope is that all fandoms are going to change so they’re more inclusive, and folks of all stripes can get together and make cool fan things. But knowing what I do of history, and how women’s spaces and trades and even what babies wore (boys originally wore pink) are so heavily influenced by the stories and narratives we create (as opposed to “what x person with x sort of genitals that roughly conform to x standards ‘naturally’ likes” because that’s pretty much horseshit), it concerns the hell out of me. I can see the narrative changing right there in that Forbidden Planet headline.

And it gives me the fucking creeps.

I want a more inclusive fandom for everybody. I love having dudes in MLP fandom, because it means it’s gotten more media attention. It’s finally an actual legit fandom.

What gives me the chills is the fear of being kicked out of something I loved because dudes will eventually own it. The historical precedent is so long, and so sharp, that all I can do is hope we’re going to have a tidal shift in how we deal with sexism in fandom. Because if we don’t come to grips with sexism, if we don’t say, “Hey, X fandom is cool no matter who’s in it and we should cover it and speak about in a way that actually respects and represents the fans” then we’re just going to keep perpetuating the “this is cool so we better keep out the girls” bullshit.

If we don’t, how long will it be until I’m on an MLP board and get called a “Fake geek girl” for liking My Little Pony?