Now that the year’s taxes are done, it’s time to play the yearly “How much I made writing fiction last year game!

I’ve written before about how fiction earnings have made up about 12-15% of my yearly income in times past. Since I know you all love these graph posts, here’s a nice neat graph of how much I’ve made in fiction writing earnings since I sold my first novel the first time in 2008. It was cancelled, then re-sold in 2010, which is why you see the rise and huge fall there in the middle when my first publisher stopped paying me for awhile, then got sold and reconfigured.

Note that these are approximates, as I haven’t actually pulled all of my tax statements to do this for the early years – I’m going off memory for those. But this is about right. My agent pointed out that this year’s royalties will probably bump up what I’m projecting here (MIRROR EMPIRE moved quite a few copies. Thank you all for that), but until I actually see royalty statements, I don’t count that as cash in hand. It’s too variable, and, as said, I’m used to not being paid for long stretches, as you can see in the middle there. 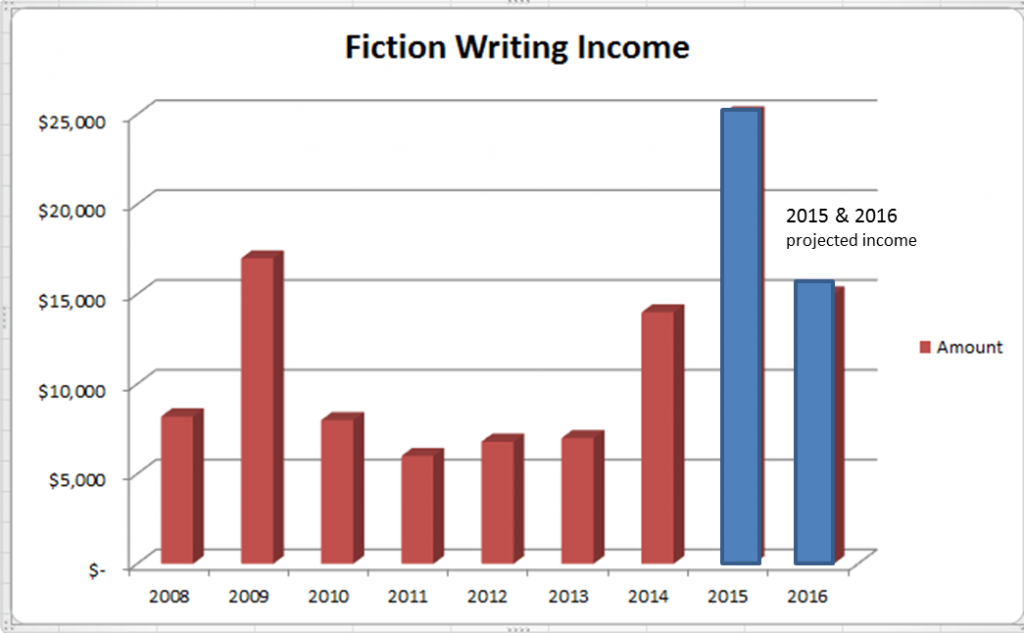 Mostly what this shows is that fiction writing is not a stable way to make a living. Jim Hines has a similar bar graph up at his site. You’ll note that he’s consistently made quite a bit more than me, because we write very different things (and he didn’t sign with that exploding publisher!), and at difference paces. So YMMV. But if you’re looking at me online and thinking, “I want to be that rich and famous!” well, there you go.

People often ask: why do you share these numbers, Kameron? No one shares how much  money they make! Well, I do. And there are several reasons I do, but the biggest is this: at your day job, and in publishing, it’s in the company’s interest that their employees keep how much they’re making to themselves. This is a pretty classic divide and conquer tactic, and it never, ever works in favor of a creator. I’ve learned more and pushed for more on learning what others were paid, even if those gracious folks sharing only ever did so at a con bar. I know that not everyone can go to a bar at a con, so I make these numbers public because it helps folks. I know I felt like a miserable failure when I’d look at how I was only making $6-7,000 a year writing fiction. Then I talked to other writers and realized that was not as uncommon as I thought. A lot of writers who’d been in the game a long time, won awards, and had strong social presences weren’t making much more than that either.

I’ve been hearing a lot of folks say that this may be a turning point in my career, that things may be taking off. To that, well, I point at that dip there in the middle. Sometimes, it’s true, your income goes up and up, and that’s great. But more often than not, writing income is a wave, because the market is a wave. Sometimes you’re up. Sometimes you’re down. So I don’t count my chickens. I take it one book at a time. As I’ve learned in this business, you’re only as successful as your next book, and I have many more to write.

When a lot of folks enter this business, they come in playing the short game. They want the million dollar deal up front. They expect riches with that first book. But that’s just not realistic. Yes, there’s the occasional Rothfuss effect, but most people who end up making a living writing (if they make it at all), do so by building a career book by book. Eventually, if you have a strong backlist, you can live off small royalty checks for a good long time. But it takes a decade or more to build that backlist.

So if you’re coming into the game, getting that first novel published after ten or twenty years of slogging through the slush piles, celebrate, to be sure, but remember that the next era of slog is on the horizon.

Play the long game. You’ve got a better chance of staying in it that way.