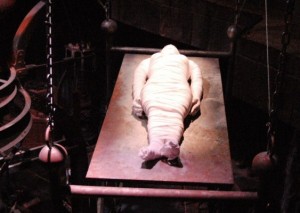 I had to go to the doctor yesterday, which is something I have to do often and have come to hate and resent more than is probably appropriate. I had not been to my endocrinologist for nearly a year and a half, which isn’t to say I haven’t been to the doctor in all that time. I’ve been in for two surgeries and some followups, and been to urgent care twice. Which is probably why I was avoiding my endocrinologist, whom I’m supposed to see every 90 days.

When you go to doctors this often and get interrogated about your habits and your health and then jabbed with needles, prodded by fingers and knocked about the feet and knees to test your reflexes to ensure you’re feet aren’t going to fall off, well, it gets to you. I get so angry walking into the reception room that I have to start cutting things away, disassociating myself from… well, myself, and pretend all of these invasive indignities are happening to somebody else.

I learned this trick with strong emotion early on. I feel things as intensely as anybody else, but in times of great stress, trauma, or emergency, freaking out and breaking down aren’t useful. Nor is screaming at people when you’re angry, because they tend to just tune out. Emotion is seen as a weakness in this culture, and when women do it it just reinforces stereotypes about hysteria. So I learned to cut away those parts of me that were angry or overwhelmed and just endure things like they were happening to someone else. It comes in handy during doctor visits now. I honestly don’t think I could endure them without this trick, because the alternative would be to burst into an angry tirade at my doctor and ask her what the fuck all these appointments are for.

We go over the same litany – do you exercise? Do you test your blood sugar? What vitamins do you take? What do you eat? And then there’s the same boring tests every damn time, the same height/weight (am I expected to SHRINK every three months?) tests, the blood pressure, the pulse, the thyroid test, the reflexes tests, the breathing tests, and then, of course, the blood test and finger pricking and blood drawing.

And when it’s all over, every three months, I hear something to the effect of, “Well, nothing’s wrong yet. I’ll see you in three months. “

Chronic conditions are huge downers, because it’s not like after five years post-cancer they declare you cancer free and you run off into the sunset saying, “Fuck you cancer!” and you can at least tell yourself at night that the chances of recurrence after a certain point are very slim. Instead, there’s this expectation that every day, I get closer to dying. That we’re just waiting until something goes wrong. It’s a disheartening way to live. It’s not like I go in every three months and we talk about new treatments and therapies, or advances in insulin pumps or cheaper testing strips or some other thing that will make my life better, faster, longer. No, it’s just “Well, nothing’s wrong yet.” And then I pay out a couple hundred bucks and leave with some prescriptions for daily medications that will cost several hundred more dollars each month (all of this *after* insurance). Even if I have a slightly higher than my usual A1c, it’s not like we have a chat about ways to fix that, because, yanno, if my blood sugar numbers have been higher than usual, I pretty much know exactly why. It’s generally not some mysterious thing, it just means life won during those particular three months. Some days my struggle is easier than others. The last year of craziness meant something had to slip, and my numbers certainly did.

So if I know what I’m supposed to do, and nothing’s ever going to get better, what’s the fucking point of this? Why am I spending hundreds of dollars for someone to tell me I’m still sick? The “best” outcome of any visit is just to hear that “nothing’s wrong yet.” Catching things that are wrong early is great, but do I really need to come in every 90 days for that?

The indignities you put up with as a constant patient are exhausting. You start to feel like a thing, a slab of meat. And then people have to treat you like you’re stupid. During this particular appointment, there wasn’t even any small talk. It was all business. It was kind of exhausting, and it felt so pointless that I was angry for hours afterward. “Do you test your blood sugar?” she asks me, and I nearly lost my shit at that. “WHY NO I JUST SPEND HUNDREDS OF DOLLARS ON TESTING STRIPS BECAUSE I’M BUILDING HOUSES FROM THEM.” I mean, what kind of stupid thing is that to ask somebody with an immune disorder like mine where not taking synthetic insulin for more than 48 hours results in death? I mean, come on. Seriously?

And yes, before folks ask, I have the best endocrinologist in the area, one who isn’t taking any more new patients, and who I know I’m lucky to have because she’s so thorough. This is the best of the bunch. It’s just the way it fucking is. And you know, it gets to me sometimes, how you start to just have to tune out from the whole process, because it’s so exhausting and humiliating. It reminds me of my defective body, the one I learned to love after so many years of being told by the media that I was a useless person because I wasn’t femmy eye candy. I learned how to revel in my body’s strength and power, and to be put in a position where I’m seen as defective again is just aggravating. How do you combat perceptions that you’re defective meat when you know it’s true? When you know that a hundred years ago, you’d be dead, and you’re only hanging onto life through constant monitoring and multiple daily shots of a synthetic hormone that your body no longer makes?

My illness is largely invisible, and most people don’t realize how bad it is, and how seriously I rely on synthetic insulin to live. I appreciate a lot of that invisibility, and maybe that’s the issue. Because when I go into the doctor, I get treated like a sick person. In real life, I get treated like a healthy person who can hit things hard. That’s nice.

But on the slab, I’m just another defective body. Another piece of meat.