Burt Wonderstone and the Pitfalls of “Ironic” Misogyny

I went out last night to see the Incredible Burt Wonderstone, a cute little movie about a couple old-school buddy magicians dueling with Criss-Angel-stand-in Steve Gray (Jim Carrey) for fame and fortune.

It was all right. I’ve lost my patience with people who hate everything. It had some funny moments, and everyone seemed to be having a lot of fun. But there’s this thing about modern stories that once you see it, you can’t unsee it.

There is one female character in the entire show. The only people of color are shown as starving people without food or clean water who live in some unnamed foreign village. What’s almost worst here is that the show realized it had one female character, so made obvious attempts to give her something outside of being a love interest or minor bling for someone else’s story, but sadly, just ended up making it even more glaringly obvious that no one considered her human. The the addition of brown people was so they could supply a dues-ex-machina plot device. They were there for the magic, silly. Oh goody.

Burt Wonderstone is a jaded Vegas magician working with his best friend Anton. Together, they do the same old hackneyed tricks they’ve always done. They’ve lost their love and awe of magic, the sort they had as kids. Burt goes out of his way to be an asshole. He’s mean to his friends, mean to his staff, and purposely demeans their magician’s assistant, Nicole, until she leaves in the middle of a performance. He then demands that they disrobe one of the techs and that she stand in as their showgirl for the rest of the show. The woman, Jane, is literally stripped down to her underwear, thrown the old showgirl’s wig, and tossed on stage, where Burt proceeds to hit on her in the most creepy way possible, even after her repeated “no”s.

He ends up taking an audience member to bed instead, whom he has sign a waver where she acknowledges that she in consenting to have sex with him, presumably because women have accused him of rape before, something not at all inconceivable based on his repeated harassment of Jane. Burt is an asshole rapist in the worst way, continually pursuing Jane throughout much the show, and belittling her talent even as he asks her for help after his show is cancelled at Bally’s and his finds himself broke. Even with her hero worship, I could not imagine her putting up with this.

Jane turns out to have literally a few tricks up her sleeve and demonstrates to Burt than she is a passable magician. She even offers to be his partner since he parted ways with Anton, but he refuses based purely on the fact that she’s a woman and women don’t do magic. Now, this is all done tongue-in-cheek. There is an assumption here that, we, the audience, are supposed to acknowledge that Burt is being an idiot dinosaur. But I just could not believe that somebody who was born in 1973 would so seriously and blatantly say the sorts of things that he said. But then, maybe I’m unfamiliar with Hollywood egos. I’ve heard people are pretty outspoken asssholes. 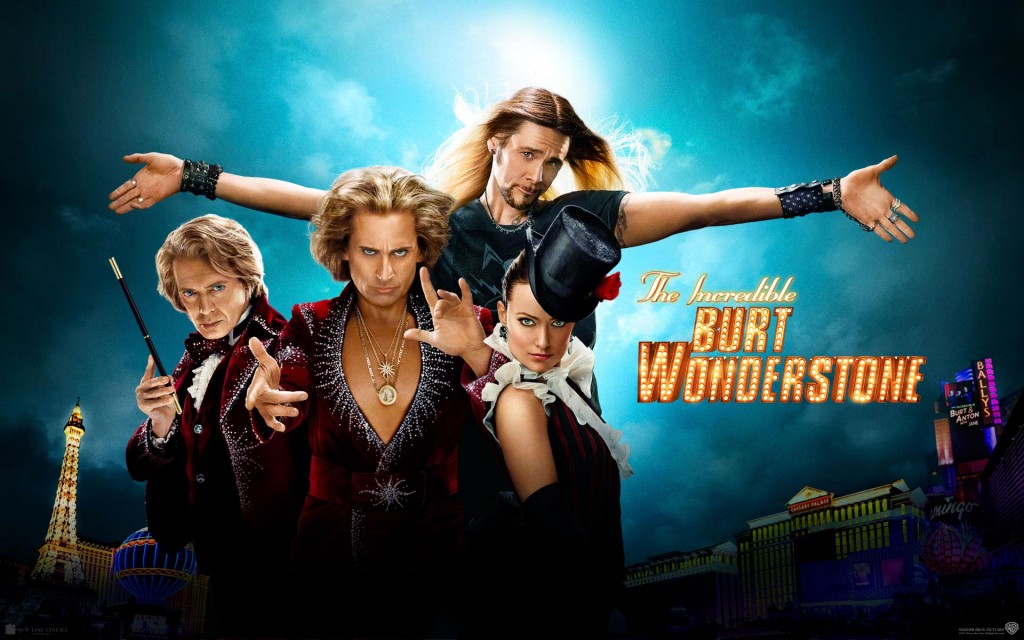 The trouble with this entire exchange was that movie conventions had me assuming that Jane was supposed to be Burt’s love interest. I was sitting stiff and uncomfortable through every scene these two people had together, and though I’ve certainly had an abusive boyfriend who coerced me into sex and did indeed speak about women in this way, I haven’t been violently sexually assaulted. I can only imagine what folks with more brutal attacks from these kinds of guys were feeling while watching this kind of set up.

It turns out that Burt and Jane don’t end up getting it on romantically, so there’s a thumbs up for common sense, but the threat was there the whole time, this expectation that I was supposed to feel sympathy for an asshole rapist because he really liked magic and was down on his luck. (NOTE: my partner tells me that they did, in fact, get it on when I got up to go to the bathroom. GAAAAAHHHHH. This is so incredibly fucked up in a show that says “don’t do violent magic because kids might copy you!” but then shows women hooking up with abusive men without a second thought)

Turns out that while down on his luck, he ends up entertaining at a nursing home, and meets his boyhood crush, a famous magician who, through a short montage, apparently teaches him to love magic again. After this montage, Burt also apologizes to Jane for his rude behaviour, and she quite literally forgives him for all of womankind that he’s insulted and assaulted, “On behalf of all the Nicoles, I forgive you.”

I suppose we’re supposed to assume it’s all water under bridge now, and sympathize with him now?

See, here’s the thing. I like asshole characters. I think they’re interesting. I write a lot of them. What squiks me out is this idea of the redemptive asshole. Like, the asshole mass murderer apologizes, finds Jesus, and we’re supposed to forget about and forgive everything that’s come before, even when there has been no real clear journey toward an epiphany. It was just like, “Hey, I’m poor now, so I learned my lesson. Forgive me and sleep with me!”

Anybody who’s been in an abusive relationship knows this cycle. The guy (usually a guy) does some horrible thing, then when you threaten to leave he weeps and apologizes and says he won’t do it again and he’s learned his lesson. You might have a good couple weeks after this, but then he does some other horrible thing, and the cycle repeats.

Eventually, Burt and Anton get back together, and with Jane’s help (always help, assistance, never actual “hey I came up with this idea!” just “yes I will help you execute that!”) come up with a pretty ridiculous deus ex machina of a trick that reminds us of why there were any starving brown people at all shown in the movie – to support the telling of somebody else’s story, of course.

I actually had to get up and leave the theater when they came up with this “plan” because I found it so annoyingly appropriating.

Now, I don’t want to hate all over this movie. Back in those wonderful pre-college days when I watched every movie pretending that I was a man and I was, indeed, being talked to and invited to participate as a man in men’s stories, I think this would have annoyed me a lot less. When you grow up telling yourself that you’re not a femme person like THOSE women, it’s easier to watch stories where women are relegated to the sidelines as mere supporters of boys. It’s easier to digest casual misogyny, because you think, well, they’re not talking about ME, but what I learned after going out into the big wide world is that, in fact, the world DID see me as a woman just like in the stories, and it treated me like one. Why? Because these are the stories we watch. Because these are the templates we use to tell people how to act toward one another. It’s how we prioritize stories.

So, you know, it’s a fun little movie about dueling magicians. There are some genuinely laugh-out-loud funny moments. It was even co-written by John Francis Daley of Freaks and Geeks (and Bones) fame, but then, seeing the other problems that those associated with Apatow have with the portrayal of women and non-white people in their films, I shouldn’t be surprised at these huge blindspots.

You know, I think it was almost worse because this film did a nudge-nudge wink-wink to the audience so that they KNEW what they were doing with lines such as: “I said “no offense” before I told you women can’t be magicians, so you can’t take offense!” and “it turned out starving people wanted food and clean water, not magic.” It knew very well what it was doing. So it acknowledged it and then handwaved it anyway.

That was the worst. I may have preferred unexamined knee-jerk misogyny to intentional misogyny.  At least with unintentional misogyny and racism, you can say you didn’t realize what you did. But putting obvious dialogue flags in there just makes it worse. It’s like, “Yes, I know this is sexist, racist, and problematic and lazy, but I’m going to do it anyway! For laughs!”

The thing was, those were the least funny parts of the whole film, because they were tired. The best parts were between Burt and Anton and the other magicians. You know, all the boys-boys this film was actually about. It’s like, instead of putting in real characters to interact with them, they threw in this stereotypes instead, and it brought the whole movie down.

When you’ve dealt with abusive people, and when every movie you watch has some woman in it being raped or coerced into sex or sold into sex slavery or who’s “just” the wife or girlfriend of the “hero”, seeing it again in yet another movie is exhausting. Everybody says of their film or book or story, “It’s just this ONE story!” But it’s not. It’s this one story and the one before it. And after it. And the 50 before it. And the 100 before that.

As a reader, as a consumer, as a human with female sex parts, I am really tired of this kind of lazy storytelling that absolutely ruins films that could otherwise be pretty enjoyable. If your sexist, rapey protagonist has half your audience frozen up in their seats and excusing themselves to go to the bathroom so they don’t have to put up with what they put up with in real life in their escapist media as well, you’re doing something wrong. You’re a bad storyteller.