Movie Roundup: The Good, The Bad, The Ugly

The upside to a nine-hour flight is that I got to catch up on a lot of movies on the way back. Here’s a round-up of what I saw, with rec’s as necessary:

Hansel & Gretel: Witch Hunters
I wasn’t going to touch this movie with a ten foot pole, but a lot of people recommended it as good, campy fun. I suspect that this movie is what Bloodrayne should have been – a fun, silly romp that didn’t take itself too seriously. The script was silly, the premise was silly, and the actors all knew it was silly, but dammit, they had a lot of fun doing it. Points for passing the Bechdel test; points subtracted for badass female witch hunter who somehow gets one-upped in a scrap with a couple of dudes. Lots of witty dialogue and ridiculous “sugar sickness” that left me snickering.

The Adjustment Bureau
A Matt Damon and Emily Blunt feature that reminded me a bit of the Matrix. Damon is a political candidate who discovers the existence of an “adjustment bureau” – people who work behind the scenes for “The Chairman” to engineer the events of our lives so that they stick to the plan written for us. I liked this idea, and it had another Mad Men star working as the antagonist. Blunt and Damon also had some actual chemistry both as people and characters – I actually bought that these two people were falling in love, which, to be dead honest, doesn’t happen in most movies. Despite the interesting premise, it got a little heavy-handed in the end about free will and destiny and True Love, and the way he ends up dragging the heroine around in the latter half of the movie really bothered me.

In Time
Excellent SF worldbuilding here – in the future, we’re all equipped with clocks that kick in when we turn 25. We cease to physically age, but we’re forced to barter in time –literally minutes of our lives, which are exchanged through the touching of 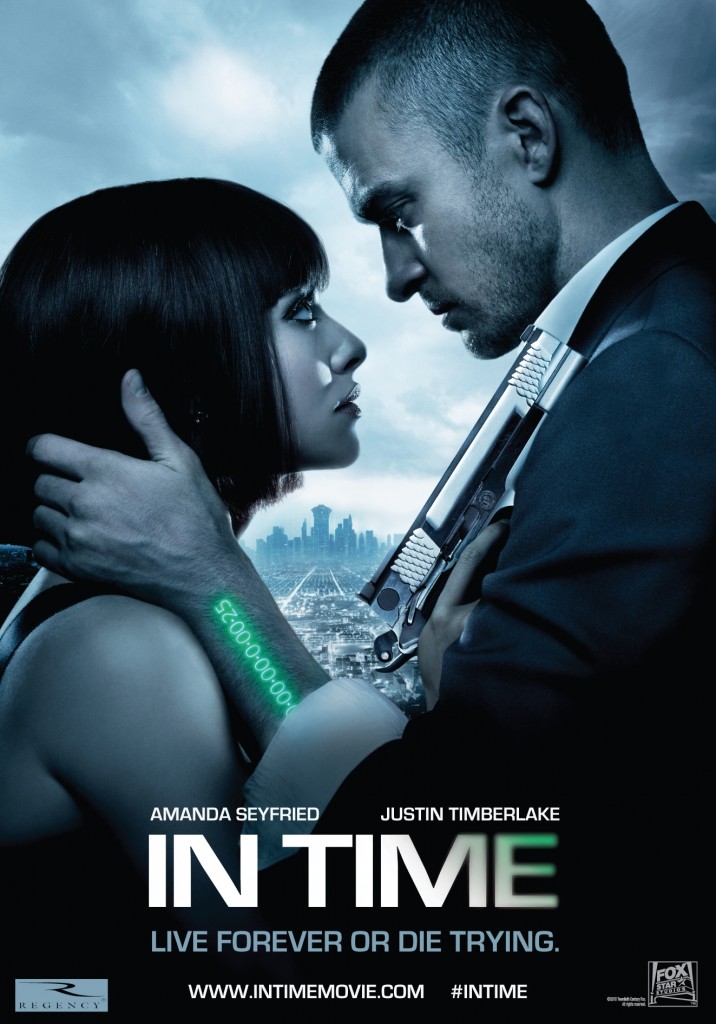 wrists. So it’s 6 minutes off your life for a cup of coffee, and maybe 30 hours for a day’s work, and seven hours for a hotel stay. Rich people, then, are effectively immortal while the poor are literally(!) getting by day-to-day with minutes to spare. When your time runs out, you die. Yes, really! So folks who are bad at math and budgeting are pretty much fucked in the future. This concept won me over when the protag’s mom goes to pay off a loan worth two days, and her clock only has an hour and a half on it, and she goes to take the bus to meet her son, who’s going to give her twelve more hours from his job that day – but the bus fair has been raised to 2 hours. The walk to get where she’s going is two hours. With just an hour and a half left, she runs the whole way to meet her son. There’s this astonishing scene with them running across the dark pavement toward one another, arms outstretched – you can guess what happens. The movie has some issues with women – they mainly exist to inspire the protagonist to overthrow the world, and I had real problems with the Stockholm-syndrome “romance,” though it was a bit redeemed in the end when the female protag actually started to make some real decisions and show some agency. Would have also preferred a stronger actor to lead this than the rather bland Justin Timberlake. Even Eminem would have been preferable. Cillan Murphy plays a wonderful bad guy, though, and Pete Campbell from Mad Men makes an appearance as one of the immortal rich folks. Absolutely worth watching for the fascinating worldbuilding and dystopian swagger of the thing. You’ll roll your eyes at the underutilization of the women characters, but it’s a fun ride despite its flaws, and got me thinking a lot about the economics of future fictional societies.

Bridesmaids
I put off watching this one for a long time because it was toted as a Judd Apatow production, and… well. Apatow stuff is fun, but tends to treat women as crazy harpies sometimes; and they’re often tangential to the story. Turns out it was produced by Apatow, but written by Kristen Wiig (who also stars) and Annie Mumolo. And, of course, it has everyone’s favorite comedian, Melissa McCarthy. I laughed so hard throughout this entire movie on the plane that my spouse requested that we rent it and watch it again when we came home so he could see what all the laughing was about, so I’ve seen it twice now.

This was a wonderful, funny film about best friends where (surprise!) it’s the dudes this time who are tangential. In fact, the groom and the antagonist’s husband don’t even have any lines, which was actually pretty funny. Kristen Wiig plays a former baker whose bake shop closed during the recession and whose best friend, Lilian, is getting married. Wiig is tapped to be maid of honor, and ends up fucking up everything while her best friend’s new friend Helen tries to usurp her place in Lillian’s heart. Wiig is both funny and heartbreaking. Her slow spiral into depression and near-madness hit a bit close to home for me; I’ve been down and out before, and watching her struggle really connected with me. I also liked how the romance was handled in this one, too. Jon Hamm of Mad Men (lots of Mad Men folks getting bit appearances these days) makes an appearance as her insensitive fuckbuddy, with the lead romance being played by Chris O’Dowd, who does a lovely job of playing the soft-heartened good-guy everyone loves to love.

This was another film that did a good job with the romance. I actually believed these two had a connection and genuinely liked one another. It was also, of course, a film that stood out due to the sheer number of women characters filling the screen at all times. It was a lovely change from the norm, which has genders reversed. Sometimes films that tell women’s stories dumb it down and simplify it, but this movie did a great job of showing women as people, not appendages or sidelined characters or harpy caricatures. Terribly fun, and highly recommended. We need more films like this. 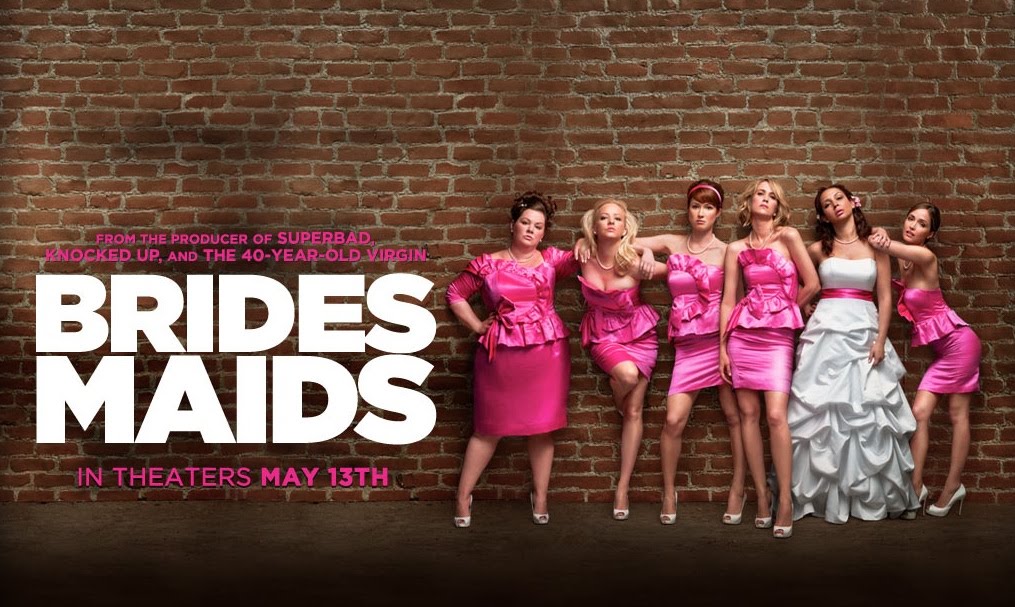 The Anchor Man
This was the second time I tried to watch The Anchor Man. It’s trying. I know it thinks it’s trying. But it just punched me in the face repeatedly, to the point where I couldn’t go on. Will Farrell plays a 1970s local anchorman in an all-man newsroom which is forced to take on a new woman anchor to “diversify” the station. Played by Christina Applegate, the new anchorwoman is repeatedly objectified and harassed. And it’s real objectification, you know, the sort that makes it clear these guys view her as a thing and not a person. There are shows that present harassment of this sort in order to counter it, or to make a point, and though I felt like this was their intent, I found the constant harassment so distressing that I just couldn’t finish it. What’s worse is that Applegate’s character was, for some bizarre and inexplicable reason, indeed attracted to Ferrell’s character. There was absolutely no reason for their attraction beyond he thinks she has a nice ass and she thinks he’s cute and admires how he can play jazz flute. I needed a lot more heat/connection to buy that a woman who worked that hard to climb the ranks of the newsroom would risk it all by sleeping with this guy, and that just wasn’t there for me.

Crazy, Stupid, Love
I started watching this because it had Ryan Gosling and Steve Carell in it. Sadly, it was just one big mess of dudes getting cuckolded by women and then hitting on women; much of the first thirty or forty minutes is Carell learning The Game playbook from Gosling. So you’ve got this romanticisation of these guys persuading women to sleep with them even when they, effectively, say no – she says no to a drink? Buy her one anyway. She says no to going home with you? Don’t take no for an answer. It was bullying. This was another movie where I felt the ultimate “point” wasn’t in favor of these tactics and the “message” would be love will conquer all, but it felt very pushy and degrading toward women, as if they didn’t know what they wanted and men were there to tell them; women who wanted a divorce, or didn’t go home with you, or didn’t want to go out with you, just needed to be persuaded otherwise. And this is both a totally wrong and incredibly destructive message. Women are, you know, grown women. We know what we want. And if we don’t, we’re not in a place where we should be in a relationship anyway. Probably would have made a better movie if it was just lots of slow pans of Ryan Gosling wandering around saving puppies.