NO HERO: Brain squid, explosions, and yes – chicks with swords 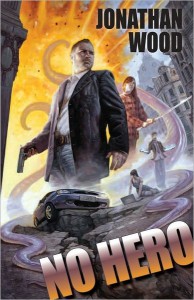 I don’t even know why I started reading this book. My publisher sent it along with a stack of others I had requested, and I couldn’t figure out why. I took one look at the cover and made a terrible face.

My husband, J, grabbed the book out of my hands and said, “This is AWESOME!”

I winced. “That cover is terrible.”

“Kameron, this is an AWESOME cover! Look at the tentacles! And this woman with a sword. And her flannel shirt! And this woman doing something on a computer. TENTACLES! Also, this dude with glasses, doing magical nerdy stuff, and this guy, with this gun, and wow! DID I MENTION THE TENTACLES? This cover is PERFECT. I really want to read this book.”

I was speechless. “You want to… read this book?”

He handed it back. “Oh yeah. Plus, the way the cover is laid out is a total riff on the poster for Big Trouble in Little China, so you know it will be good.”

I peered at the cover again, dubious. It occurred to me that this was just going to be one of those books that wasn’t marketed to me, but as per J’s reaction, it was most certainly highly targeted to folks like him… folks with a much finer sense of geeky culture.

But after throwing yet another promising-but-disappointing fantasy novel down, I went ahead and picked up NO HERO from my pile, just for kicks. Because, you know, the title is NO HERO. And I like that. People who aren’t heroes. So, hey. Worse case, I get a few pages in and chuck it off to Goodwill like I’ve been doing with so many books lately.

So I started reading this book. And, you know, it was exactly what it promised to be: Brain squid. Explosions. Socially awkward people. The end of the world.

The further I got into the book, the more I wondered why I kept reading, and the more I kept reading. For a book that’s also kind of a an anti-Urban Fantasy Noir a la Dresden Files but with a non-magical protagonist and underfunded government operation populated by a surprising number of women for this type of book, it was… awfully entertaining.

There is plenty to like here – the brain squid and explosions, the sort of broken and partially magical (but mostly not) characters, the big boss fights with animated Things and aforementioned brain squid and giant mutated monsters and, of course, my favorite – emotionally messed up women chopping off heads with swords.

The reason I couldn’t believe I kept reading this is because there’s also quite a few quibbles that will drive you nuts if you think about them too long. It’s a first novel, and it shows, with some dropped plot threads and lazy ways to avoid conflict (MINOR SPOILER: if there’s a guy with a girlfriend who wants to get it on with another woman on the team, there are more… well, not more interesting ways, but certainly more ways rife with conflict than to simply have him inhabit another body. You’re robbing us of some tension, there).

When it comes to the women in this book, I kept jumping at things that I was ready to gnash my teeth at. The protagonist is a police detective with a thing for his subordinate (of course), whose primary distinguishing and appealing characteristic appears to be that she is blond. (SPOILERS AHEAD) Her reward for being a possible love interest is, of course, getting killed by the bad guys to make the male protagonist suffer. When this happened, I threw up my hands and snarled because honestly, no wonder she wasn’t really fleshed out – she was just there to serve as a character motivation; she wasn’t a character in her own right. Just to prove how non-important she was, the protagonist starts moving in on HIS boss soon after.

But to dwell on that particular lazy outrage would be like saying that The Windup Girl was a horrible book because it had one female character who was, in essence, a sex slave. Yes, stereotypes suck, but here’s what makes them suck less – if you really, absolutely, HAVE TO HAVE your male protagonist’s love interest die horribly to serve the plot, then you had BETTER have more female characters that JUST THAT ONE. If she’s the only one, you FAIL.

And this is why I didn’t hate this book. Or throw it across the room. Because brain squid and chopping off heads or no, if you tell me my only role in your book is to serve as a character motivation, I’m done.

NO HERO doesn’t do that.

Instead, there’s a diverse hodgepodge of female characters. Yes, I have my own issues with each of them, but they were THERE. And that’s the first step. Baby steps, people.

The protagonist’s boss – the head of a… well, not elite, but let’s say “special” team of folks dedicated to going after these inter-dimensional brain squid – is a woman (also, a love interest. But let’s hand wave that for now. I guess that was to make up for the blond? Whatever. She, at least, has purpose. OK, well, she gave up a lot of her power to the protagonist, who she felt was supposed to save them, and was suddenly relying on his opinions a lot, though even he wasn’t so sure why he was supposedly qualified for this job. Urg. See, you can’t think about it too much). Then there’s the research guru, a smack-talking goth (really, that’s how I pictured her) named Tabitha, who, OK, also ends up a little smitten with another guy on the team. ::sigh:: OK, but then there is Kayla, the chick with the sword. She chops off heads to kill brain squid, and has superfast killing abilities. OK, yes, she is motivated to protect two children she saved from brain squid, but… OK, OK, there are some issues, I admit, which is why I felt so damn guilty reading this book. Don’t get me started on the succubus.  But there are, in fact, women in this book. With opinions and abilities. And nobody gets raped! It could have been much, much worse.

And yet, for all that – I kept reading this book. Why? Because I was engaged with the protagonist and his ragtag band of fellows and the mutant brain squid more than I was annoyed by the stereotypes (in fact, these female characters were just at the cusp of being awesome. It wasn’t until I sat down and started thinking about all of their motivations and relationships that things started to truly unravel). And at the end of the day, the book fulfills the title’s promise – the protagonist is not really a hero, and (MORE SPOILERS) he doesn’t even save the day the way he’s supposed to. A child still dies, but it’s her sister who saves the day, not the protagonist. And that, right there, may have been the big redemption for me in this book. There was, indeed, at least one female character who wasn’t primarily a love interest, or motivated my maternal instict, and gained instead of gave up power.

Now, when I write up mixed-bag rants like this one, I need folks to understand – if I really hate a book, I don’t finish it. And I certainly don’t write about it. But if something bugs me about a book, I’m going to talk about it. It’s not often that I finish a book without wanting to throw it across the room at some point (Mechanique and The Cloud Roads are the only ones I’ve read recently that are pretty near perfect, and I’ll be posting about The Cloud Roads later).  What I found the most fascinating about this one is that despite my annoyance (and the obvious fact that this was NOT a book targeted at somebody like me), this really was a fun little ride, and a big change of pace from what I’d been reading.

So if you like brain squid, and chicks with swords, and lots of shit blowing up, and you totally “get” this cover – and if you can forgive some cringe-worthy moments of annoyance – this is a crunchy little popcorn book.