No Refund for Bugs 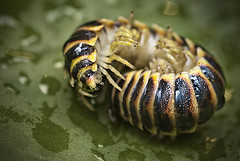 I spent last weekend off the grid at a cabin in Hocking Hills. Packing up four adults, two dogs, and a 2-year-old may not have been the best idea we ever had, but it worked out.

But now that I’ve lived in and around cities for the last six or seven years, and since developing a terrible Twitter addiction, the cabin idea started sounding really great.  Half an hour from the nearest town with no wireless internet or cell phone signal? Boy does that sound divine.

The first day we got in, my friend Stephanie spied a note from management that said, “Thank you for visiting our cabins! Please remember that you are in the WOODS. There are BUGS in the woods, and though we make every effort to spray for bugs, you will see some insects in the cabin. It’s important to remember that there are NO refunds for bugs.”

And as night descended we discovered that there were, in fact, BUGS, which delighted my dog-who-thinks-she’s-a-cat to no end. Caterpillars, regular moths, giant moths, june beetles, flying ants, black and orange centipedes, several kinds of spiders, plumes of mosquitoes, and massive deer ticks. The place was not infested, mind, the bugs simply… well, they were merely additional residents, spied occasionally lurking in bathrooms, and riding the wind in from the outdoors through neglected doorways and catching rides on dogs and toddlers alike.

My surprise at the sheer number and variety of bugs, despite having grown up in the woods myself and living in subtropical Durban, South Africa for a time got me to thinking about how easy it is to get disconnected from life outside of both urban and suburbia. We forget about how mundane it is to wash ants out of our hair and pick ticks from our legs or shake out sheets before going to sleep and shoes before putting them on.  These are everyday details that are also easy to forget about in fiction, and it occurred to me that this is likely one reason that so many fictional societies look as cleanly polished as a daytime sitcom.

There are a good many details that go into creating a place. The water out there tasted strongly of sulpher, which, to my palette, actually tasted a lot like chlorine, and made the stuff barely palatable. At night, it actually got dark. I mean, really dark. Deep, black, there-is-shit-gonna-get-you dark, and totally still. In the morning, all I heard was birds (and the happy running toddler, of course). And there was nothing to occupy our attention online. It was all reading and cooking and playing card games.

I see a lot of people fail when it comes to creating places, and I’m not always sure why that’s so. If you can’t afford to travel, you can get all the sense of place you need from reading (good) books about places that are unlike your own. Maybe we don’t read enough and spend too much time watching TV about the same places, so everything we write about has the bland feel of television. Maybe we forget how weird and scary and buggy the world can be. Some of my favorite reactions to God’s War were from people who were creeped out by the bugs. I’m creeped out by bugs, too, but man – how did people who can’t stomach roaches ever live outside? How do you live anywhere but the mythic fantastical scrubbed-street assumption of this particular time and place?

Because boy oh boy, let me tell you – in life, there’s no refund for bugs – and if we’re making real living, breathing worlds, there are likely going to be a hell of a lot of them.