Writing Craft: How I’m learning to plot my way out of a paper bag 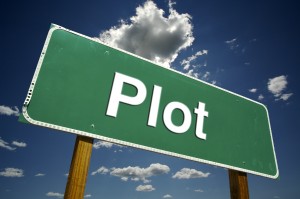 I’ve talked often about how I can’t really plot my way out of a paper bag. Much of this is simply due to lack of practice. When I started writing stories, I was far more interested in the people, and later, the settings, to care much about why and for what overall purpose and to what end all these people were exploring a haunted house, or another planet, or butchering unicorns (like you do). I was more interested in how they got along with each other and how the mountains on Mars blew out great founts of flowers.

Plot is something I’ve worked hard on, but not enough for it to come easily. It wasn’t until my former agent pointed out to me it might be nice to mention the aliens in the third book of the Bel Dame Apocrypha in order to give that overall story arc a wrap-up that it even occurred to me that that was a thread I should carry through. I was too focused on the personal journeys of my characters to care much about the external arcs and stories of the wider world.

Plot is my big blind spot. The thing is, I’ve gotten very good at hand waving enough for folks to generally not notice that until they get into the thing. Which honestly kinda sucks because the last thing you want is for folks to close your book and think, “That was great!” and then the next day realize there was no actual plot and then feel tricked.

I still have this quote from back at Clarion, from David Hartwell actually, that says, “You write so well you can make people believe you even when you’re writing utter nonsense. This will get you far.”

I don’t think I fully grasped what this meant until recently when I was reading randomly through an ARC of RAPTURE to remind myself which changes got in before it printed and suddenly found myself caught up in the events of the story again. It’s this scene where they’re at the top of this living wall, gazing out onto this bloody crimson flesh-eating desert, and there’s this super-magician expositing about the End Times and some kid’s turned into a raven and there’s a girl who’s lost her arm and hints about contamination and some desert feud they may be walking into, and it was six or eight pages before I looked up and realized that I hadn’t been reading critically for typos and changes in some time. I was just caught up in what was happening… even knowing, as I did, about all the flaws of the narrative and the plot and all the rest. The cool stuff was so cool, and it was written so absurdly confidently (“WHY YES OF COURSE THE DESERT EATS FLESH, DUH! WHY WOULD IT NOT??”), that I fell for my own bunk.

Clarion was when I realized I had some deeply flawed to nonexistent plots. That’s when I figured out I needed to spend the majority of my time plotting. Ok, that’s not right. I still spend a ton of time on people and worldbuilding, but it was where I needed to spend the majority of my time when writing felt like work – if that makes sense. Worldbuilding doesn’t feel like work to me. Nor does figuring out what characters want and building in character tensions. What feels like “work” to me is the plotting. It’s the stuff happening outside the characters. The stuff driving the story.

And maybe that was always my problem. I saw so much of the plot as external stuff, as the thing characters were reacting to instead of being willfully engaged with.  The Nyx books taught me that really good characters aren’t the ones who react to things being done to them, they’re the ones who actively take control of situations and make them their own.

I’ve listened to Brandon Sanderson’s lecture on progression plotting at least half a dozen times, and used that as a guide for re-plotting this epic fantasy saga I’ve had on the table for so long. Oh, I’m still working on LEGION, yes, but LEGION is already plotted. That one I can just write. The saga, though, that has to be replotted from the ground up, only without getting rid of the good stuff. It’s “don’t get rid of the good stuff” that’s the hard part. Much of me wants to toss the whole thing out and start over. But I’m not sure that’s the right idea.

So instead, I sat down with some index cards and wrote two-three sentences about what actually happens in each chapter. This was pretty illuminating. What I discovered is that there were several chapters where nothing actually happened. “Character X goes home and talks to her spouse; introduce relationship tension” is just not enough to justify a whole chapter. A scene, maybe, but a chapter? This chapter either needed to do a lot more for the overall plot or it needed to be combined with another chapter.  This also let me see some of the deep, deep structural problems with this novel much more clearly. It goes so long with nothing happening, and so long without revisiting certain characters, that it feels totally plotless. And then, aside from her weird relationship with her spouse, I had a really great, dynamic character that I wasn’t doing anything really intrinsic to the plot with. She was just in there cause she was cool and it seemed like I should do something with her but still hadn’t figured out what.

Once I knew what happened in each chapter and combined or added events to chapters, it was time to go back to the overall one-book plot and find places I could add in progression points. Just little telegraphs like, “Hi, reader, our goal is X!” followed by, “Hi, reader, we have reached (or not) goal X and here’s a new goal! (or, the goal has changed to something else cause we failed)” This also let me give my cool character a lot more to do that actually meant something to the overall book and series plots.

And when that was done, it was time to go back again to ensure I had a few nuggets of set-up for the overall 5-book plot. I was able to fake a lot of preparation with the GW books by simply re-reading the first and second ones before I wrote the third and going, “OK, great. Here are all the set pieces I gave myself to work with. Which ones can I use for this book?” It’s one reason I purposely threw pretty much everything into book 1, in case I needed it later (and I did).

I still need to go over more detailed outlines for the other four books in this fantasy saga and tweak those, then tweak the detailed book 1 outline to match, but at least I’m making some progress.

Using the index cards of the original chapters as a guide, I opened up a Powerpoint file (the corkboard on Scrivener would work great for this, too, but I still can’t get into Scrivener, myself) and – using one slide for one chapter – compiled all the things that did happen and also now needed to happen in each chapter. That way I can store the file in Dropbox and have it available anywhere.

Because of how this novel was written (a very long time ago), this is a pretty ass-backwards way to plot it, but there seems to be enough good stuff here that it’s worth redeeming (says my first readers!).  I think I might go nuts if I plotted another book this way, but when you have a big, complicated story sometimes you have to get big and complicated.

I remember working on RAPTURE during that week before it was due and panicking because the book was such a mess. And then there was this moment…  it was the moment I had the whole story – the way the story was supposed to be – all right there in my head. I could see it all laid out, end to end. I knew exactly which chapters needed to be written and added, what needed to be swapped, where I was missing foreshadowing… all of it. The minute I had that map in my head, I knew I had the book.  I quickly wrote down what needed to be added and changed so I could revisit it at some time that wasn’t 2 a.m. and then promptly passed out.

Right now, though, I don’t have that sense of this novel. I think that’s because there’s too much, as yet, to be addressed. But I’m looking forward to that moment. I can’t wait to see what this book looks like when it actually manages to plot its way out of the dark.