I taught a copywriting class last November, which isn’t something you’d generally ever see me doing. Classrooms aren’t for me. Public appearances are exhausting, and teaching a class is one long song-and-dance routine. You have to prep for it. Then, afterward, you’re exhausted and need to recoup for a week and then do it all over again.

But what I loved about this opportunity was that I could impart some wisdom to folks about how to actually make money writing.  One of the things that astonished me, once I got into marketing and advertising, is that nobody had ever thought to tell me I could write copy for a living and…actually… live on that money. It was always, “Hey, you can teach English or wait tables or do admin work while you write your books on the side and just be poor.”

It turns out selling stuff with words is actually a skill our nutty consumerist culture really, really values.

Very few people can actually communicate well, and fewer still can do that in writing. It’s a skill, like anything else, and because I’d gotten a head start in my teens with pounding out sentences, by the time I reached my mid-twenties I had some raw skills that I could hone.

But let’s be real – when I first started throwing together copy, I wasn’t really sure what I was doing. I hadn’t been trained, or learned from other writers. I was just blindly groping along, often referring to great ad campaigns I liked (Chipotle!) and just studying their techniques. Every time I was given something to write I’d never written before (radio ads! TV ads! Executive bios!) I hit up Google and just read example after example after example, the same way I’d read books to get an idea of how to write a book. 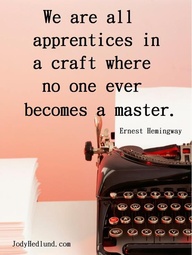 It fact, it wasn’t until the last two or three years, when I signed on to be an in-house writer with a global company, that I felt like I really started to figure out what the hell I was doing. This had to do with a couple things: the sheer volume of work, and the fact that we track the effectiveness of every campaign.

Writing so many pieces – and being able to adjust subsequent pieces to the same audience if the numbers that come back are bad – had a profound effect on how I viewed myself as a writer. Before that, I was just writing things and throwing them out there and hoping that something stuck. And lots of folks just went, “OK, looks good” because most folks don’t know how to write either.

One of the most valuable things for my career, though, was teaching that copywriting class. I’m a big believer in the idea that writing can be taught, because at its heart, basic writing-to-be-understood is just a formula. And you can teach formulas. It’s just harder for some people to pick up than others. And the people who have a rough time have to work a lot harder.

To do this I had to figure out my actual process and then communicate it to other people. It forced me to turn a critical eye on some of my favorite ads, and figure out why some worked and why some didn’t.  I also increased my reading of other successful copywriters, like Bob Bly and Joe Vitale. Reading them gave me ways to talk about things I already did but didn’t have a name for.

Ads are actually really simple formulas: Promise (you will be happy if you buy Coke!), Proof (all of these people are happy and they drink Coke! Just LOOK at them!), Price ($4.99 for a 12 pack! Here’s a coupon for $1 off!).  Or, Problem (got acne?), Solution (we can cure your acne!), Call to Action (Call 1-800-acne today!).  I’d go so far as so say every successful ad adheres to this sort of formula – with some variations for length, like the addition of further proof points – but it wasn’t something I was explicitly taught, it was something I just absorbed with constant practice. I remember what a revelation it was to realize there were names for these things. Maybe I should have spent actual time studying how to be a copywriter before I wrote copy… but looking back over my school career, I couldn’t recall even one class that taught copywriting. It was just something you were expected to pick up or not.

Which is like asking somebody to just “pick up” algebra.

Studying copywriters and teaching these things to others helped me codify my own process, so that when I started to get overwhelmed by a project, or flailed, I could just go back to basics. I had this feeling the other morning, when I sat down to write yet another email for the same product, to the same audience. The emails have been doing all right, but just sending these folks the same thing they’ve been getting isn’t going to connect with the people who didn’t connect with the last message. I realized I needed to go back to the beginning of the process again – research into the product and the target audience – to see if I could glean any new approaches to the same material. You have to look for painpoints (the problem) and product benefits (the solution) and think of new and interesting ways to communicate those in a way that’s compelling.

The experience of teaching myself to write marketing copy is one reason why I always rankle when people tell me that writing can’t be taught – that you just have it (“it” being talent or something) or you don’t.

Which is pretty much bullshit.

I was reading an “aspiring” writer’s blog the other day where they go on and on about how writing is really pointless because there are so many other people in the world more talented than them, and they’ll have to work so hard to even be half as good and I was like, “Yeah, so? So you have to work hard. Suck it up and do the work.”

Because when I hear people talk about “talent” what I interpret them saying is that writing just comes more easily to some people than other people and that means only people who find it “easy” should even try. Most often, though, “talent” exists because 1) that person enjoys writing + because they enjoy writing, they’ve been doing it years and years longer than other people. Only very occasionally does it mean 2) figuring out how to write a book required very little actual effort because they easily grokked the form after a few passes.

We’ve all met those folks who just breezed through math class like it was breathing, or sat at a piano and figured it out easily and could play in a few weeks what took somebody else a few years. But looking at the bestseller lists in this business, and my peers and colleagues, what I actually see is a lot of hard work. Millions upon millions of words of hard work and discipline. Is it easier for some writers to write amazing stuff or complete a book than it is for me? Absolutely. But you know what that means? It means I just have to work harder to be as good, or as fast, or put together a better sentence. And instead of seeing that as a roadblock or some discouraging shit, I see it as a huge challenge.

I remember living in Chicago and getting a rejection slip from Ellen Datlow at the end of a really long day (back when you’d get paper rejections!) and just sliding to the floor in the kitchen and sobbing my eyes out. I was so tired. So, so tired of writing story after story. The problem with my short story writing, I would later learn, was that I didn’t actually like short stories, and didn’t read many of them. Which made writing them a bit difficult, and I wasn’t “naturally talented” enough to pick it up after reading just a few. But after many, many years, I sold some more stories. And then some books. Because I didn’t take every rejection slip as a blow to my inherent “talent.” I took it as a sign that I had to work harder. 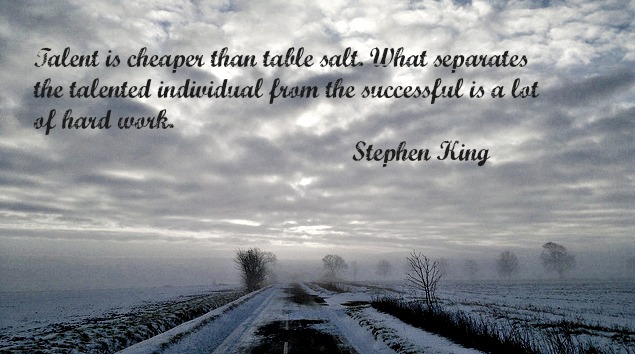 I can punch out a pretty decent marketing email these days, but I had to write nearly a thousand of them to get that good. And novels? GOD’S WAR was the third novel I tried to sell and the ninth I’d ever written, and it was rejected and cancelled many times. When I talk to other writers and find out they sold the first book they ever wrote – or, my favorite author story, “I totally came up with this idea for a novel when I was getting high with my friends, wrote it in a year or so and a publisher paid me five figures for it! It was pretty cool!” – I want to bang my head on my desk.

But the truth is, writing a book that I thought was good and a publisher/the marketplace thought was good took me a fucking long time. And a lot of failure. Continual failure. And every time I failed I’d rage at the world and then suck it up and try harder.

Because you only really fail when you give up.

If I’d given up writing marketing copy after my first email, or just said to my boss, “Sorry, I don’t know how to write radio ads. You’ll need to get someone else,” I wouldn’t be where I am in my day job.

If you suck at writing, suck it up.

The world is full of people who write poorly but passionately, and others who can put a sentence together but have no feeling behind it. All they have in common is that they don’t give up when people say they’re talentless hacks. And both of those types of writers have audiences.

I’m a believer that writing can be taught – hence the reason I taught that copywriting class – but you also have to want to be good at it.  If you say to me “Well, I’d like to be a lawyer but I don’t have the talent for it.” Then I’m most likely to tell you you just don’t want to be a lawyer all that badly (if you say you don’t have the money that’s a whole other issue entirely).

So don’t tell me you’re “not as good” as Margaret Atwood or Elizabeth Bear or Mary Renault.

You’re goddamn right you’re probably not “as good” as somebody who’s been writing a decade, two decades, six decades longer than you, every day, often to the point of injury.

Don’t tell me you don’t have talent, or somebody else has more. That’s just an excuse.

If you want it, suck it up and work harder.

Because that’s all this business is. Working harder.