When You Let Go

She had been slowing down of late, but I figured that was expected, as ten years is the lower end of the life expectancy range for these big dogs. But when we heard a scrabbling on the stairs, a thump, and that terrible hurt dog whining, we realized her decline was, perhaps, happening faster than we were anticipating.

My spouse brought her to the vet, which I initially thought unnecessary, since she favored the leg, but the limp was slight, and it didn’t look like anything was broken. The vet confirmed nothing was broken, just a sprained foot, and sent her home with pain medication. But a week later, the limp was getting worse, not better, and Nana was now only occastionally putting weight on the foot. My spouse brought her back to the vet, who said there may be a tear or a microfracture, which would take longer to heal, but told us to just wait it out. They gave her more pain medication and sent her home.

In the meantime, she wasn’t eating. My spouse was hand-feeding her ham and peanut butter, but she would hardly eat any of that either.  She stopped using her leg all together, and though she was getting around OK on three legs as long as she had the pain medication, after three weeks on pain medication, the two days she had without it before her next vet appointment were awful. She started sleeping in the cool, dark downstairs bathroom, which weirded us out. She had never, ever slept in there. Her leg joint was now massively swollen, and hot to the touch. My spouse scheduled a third vet appointment, as which they finally scheduled her for an x-ray the next day. This third doctor (at the same vet) suggested it may be cancer, but we both scoffed at this idea.

Nana had fallen down the stairs. She’d hurt her leg. That had nothing to do with cancer.

The day of her fourth vet appointment, I took Nana outside and she barely made it down the three steps to the yard before she urinated. When trying to get out of her squat, she fell down in her own urine, and refused to move. I managed to coax her up by physically just picking her up and setting her upright, but she balked again at the foot of the three steps leading up in to the house, and I had to hold up her back end and push/carry her up the stairs into the house.I’d realized there was certainly something wrong when I felt that hot, swollen joint after three weeks in which she should have been getting “better” but watching your feirce big dog falling into their own urine and carrying them up the stairs really crystallizes all of your fears. 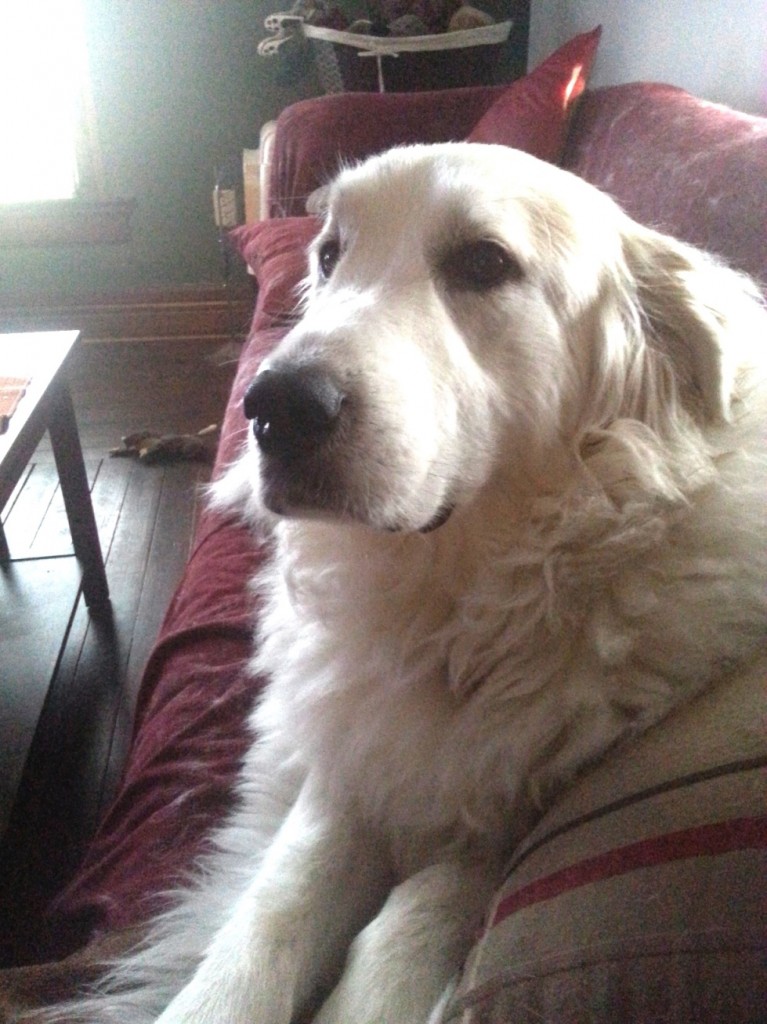 My spouse brought her to the vet for the xray, and to collect the blood work. He called in tears later in the day to say the vet confirmed that she had bone cancer. It was weakness from the cancer than caused the fall, and the injury in her leg only exacerbated the cancer, spurring it to grow faster.

Our options were few: amputate her leg and start her on chemo, and, best case, she lived for maybe six more months, and died before the amputation even healed, or – or, we could put her to sleep.

I love this dog, my friends. Nana is a hulking bear of a dog, wonderfully happy and nurturing with children and small creatures, and aggressive and intimidating to predators and folks up to no good. Great Pyrenees were bred to protect herds of sheep from bears and wolves; I’ve seen her lose her shit at an unleashed dog that came at us aggressively, and she is a fucking hellion. But sit her down with a baby or a distressed animal and she is the kindest, most nurturing protector in the world.

I did not want to put her down. I wanted to save her, the way she would try and save me.

The vet suggested they do a chest xray to see if the cancer had spread. When they did, they found a faint hint of something in her chest, but said for something more complete, we’d need to do an MRI, but to be dead honest, they said, if she has bone cancer, it’s not going to be long, and it’s not going to be pleasant. I could not imagine my bear of a dog unable to patrol the house, too exhausted to bark, strung out on medication and a poorly healing leg amputation while sick from chemotherapy drugs for the last six months of her life. I just could not.

My spouse and I agreed to let her go. But it was hard. The selfish part of me was happy to put all the costs on a credit card – we have a big publishing check coming in a few weeks, and I could pay it all back. I didn’t care what it cost. But I kept seeing her falling down in her own urine outside. I kept remembering her inability to get up the stairs, I thought of her already rapidly losing weight, losing energy, fading in front of us. How much more did I want to do to her just to keep her here?

I did not go to the vet to see her go. I could not. I didn’t want to remember her that way, on a table somewhere. My spouse gave her a good send off. He loves her more than anything, too. He arranged everything. I sat at home with our other dog, cooking and trying to forget the shock of it, of having a dog fall down the stairs and turn out to have bone cancer and put to sleep three weeks later. It was crushing, as the passing of all things are. And there is always the doubt, the uncertainty – was it really the right thing? Should we have drug it out longer, for a creature that cannot consent to either procedure – the slow, debilitating death by cancer, fogged by chemo, or the swift sleep and ending of all things?

You wonder. You always wonder.

The house is very quiet now. No dogs playing downstairs. No barking at every stray dog or noise outside. No snoring, 110-pound heap of fur luxuriating on our couch.

We got Nana when she was six years old, a rescue dog from a family who’d lost their house. She was filthy when we got her, a matted yellowish tangle of fur who could barely walk because her nails were so long. She had apparently spent most of her days in their basement, shitting on puppy pads or carpet; it took us nearly a year to break her of the habit of shitting on carpets. We finally had to remove all the throw rugs in the house. She “counter surfed” – she was big enough to jump up on counters and eat whatever you left up there, and we had to break our own habit of leaving anything – anything! – on the counters. She was stubborn and pig-headed, like other Pyrenees, and her two tricks – sitting and lying down – took my spouse years to teach her. She liked what she liked. But she loved unconditionally, completely. Every person who encountered her said, “Nana and I have bonded,” because she’d look into your eyes with her soulful stare and convince you to pet her, and she would insist on being petted for hours and hours, as long as you’d hold out. When we’d pick her up from the kennel after a week or a few days away, she’d jump up on us, and give this happy grunting whine; the only time I ever heard her give that happy grunting whine was when we’d been gone for a long time, and then we came back. I imagined, every time, her thinking that we’d disappear and leave her somewhere, the way her first family did. But we didn’t. We always came back for her.

I never had inside animals as a kid. My mom hated animals, really, and was very clear that animals were animals and people were people. But Nana was part of our family of four. She was the stinking, barking, loving bear that stretched out on our couch and put her massive head in our laps and sometimes got upset when dogs barked on TV. She patrolled all night, protecting us through the power of barking, and slept all day, and did tricks when she felt like it. She ate everything, and loved everyone. 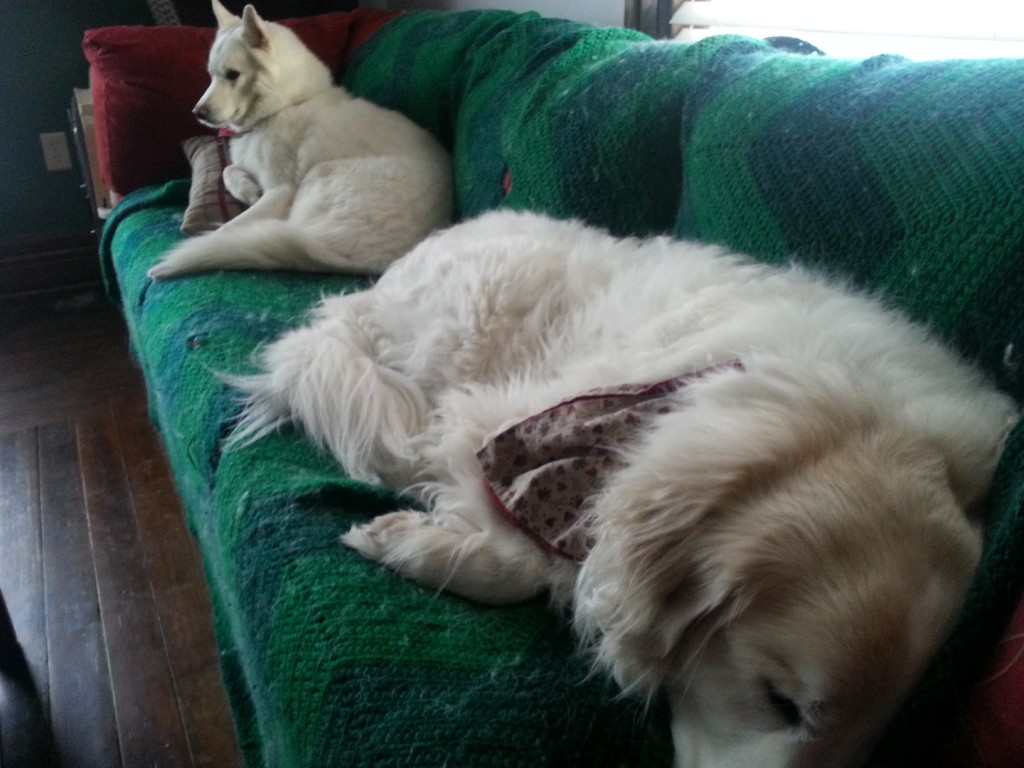