You know when you’re sitting there listening to a song, and it hits the rock-out chorus part, and suddenly you feel alive, you feel invincible, like anything is possible?

That’s what reading a great essay should be like. A story that moves you to action.

And that’s all blog posts are, really, the good ones: essays that inspire the hell out of you.

I get a lot of snark in convention spaces about how blogs don’t sell books, mostly from authors, and then I get publishers in the other ear saying, “You all should really blog or be in online spaces. It really increases visibility and can sell more books.”

Writing essays is something you do for all sorts of reasons – writing essays isn’t a great way to sell books directly, no, but if you enjoy doing it, it’s a fun way to build an audience over time as you get better at the form, and an outlet for understanding the world around you. If you get good enough at essay writing, folks will be more than happy to pay you for them, too – not just for the writing, but for the audience you’ve built for that writing.

And it’s the audience-building thing here you should be paying attention to, long-term, not copies sold. Especially if you’re a weird fringe-y writer like me who took a very, very long time to convince publishing that there was a market for what I write. How did I convince them? 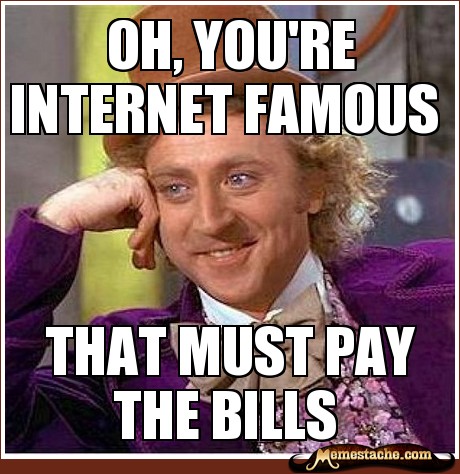 Writing a blog post won’t make you a mega-bestseller, but I can tell you from personal experience that cultivating a following of readers, of like-minded people who enjoy your fiction and nonfiction and like to talk about it, can take you from low midlist to mid-midlist, and cultivating that audience over a period of many years might even help get you over the hump from mid-midlist to high mid-list once your actual work gets better and more accessible. And those people are going to be the base you jump off from with ever subsequent book; they’re the passionate, core readers who will bring every book into market. The better the books you write, the more that core will help you launch them. They are your partners in this whole messy business. Your customer is NOT a publisher, or an editor, or a Hollywood producer. At the end of the day, the people you’re writing stories for are readers. And it’s readers who will take you places. A lot of readers – not most, certainly, but a lot – spend time on the internet.

In the ten years I’ve been writing online, the 200 people I was talking to 10 years ago has become 2,000 people and then 10,000 people and now 20,000 people – and that’s just working with the fuzzy, not-all-that-accurate stats I have to work with. In truth, with the proliferation of platforms and how messed up Google Analytics has been for me (often splitting the traffic for one post over two or three links I have to uncover), my real audience for particular posts may be 30% higher.

And I can tell you now – going from 200 pageviews to 20,000 pageviews took me a long time, and a lot of fucking work, and I’ve had to grow and improve as a writer to get there. I didn’t just fall off a truck and magically have people interested in what I had to say.

The biggest shift for me – in my writing career and in my online visibility – happened when “We Have Always Fought” started making the rounds in May of 2013. It also helps that heavy-hitters like John Scalzi and Chuck Wendig (you know, ACTUAL internet-famous people) regularly share links to my stuff now, which has also only happened in the last year/18 months or so.

Yes, amplifying other voices matters. It’s something I’m paying a lot of attention to now that I have a bigger platform, too: whose voices can I amplify? Am I just RT’ing the same four people everyone else is, or am I following and amplifying new voices?

You can see the year-over-year pageview changes here (click to embiggen):

Last year’s highest day was 17,000 pageviews. This year’s was 21,000, and you can see the bump that happens to daily traffic there at the end of 2013 as well, which builds and carries over into 2014. This is the slow, agonizing process of building an audience at work.

Highest daily pageviews this year happened on March 7th, when I hit a record 21,000 pageviews. Popular posts here garner about 5,000 pageviews, with the occasional “big” post making it into the 10-12k range. Days without big posts will generate 500-1,000 visits a day. Total views for the year were over a half a million: 597,243.

That’s… a lot, for me. When I started this blog I thought it was super when a high-traffic post got 200 hits. I remember one post about abortion got over 1,000 hits (!!!!), largely due to a lot of sharing on Livejournal. Oh, those were the days!

This was also the year I realized a lot of venues were tapping me specifically because I was bringing an established audience to their sites, not necessarily so they could “help me out” or because I’d “be a good fit” or because they liked my work (of course, you can also like my work and like the traffic, too, but the added traffic is nice). When you hit this reach, even if it’s very narrow, you start to rethink a lot of offers people make to you about “exposure.” I’m far more interested in looking at venues outside SF/F, where I already have a bit of saturation (see the top post summary below) and building awareness outside of our bubble, than just providing free or low-cost content to the same audience I reach by posting here. But to do that will require a larger shift in what I write about, too, and to be frank, I’d rather feel free to write about what I want than turn my blog into a job, too.

There’s a lot of talk about how to “build” an audience, and there are all sorts of ways to do it. My “one weird trick” is to work like hell for ten years, writing thoughtful, funny, interesting pieces that people want to read, not being an asshole, and – above all – actually enjoying what I’m writing. If you’re trying to churn out a post a day, or a post a week, “for the clicks” you will burn out.

If you don’t love doing this, stop, because we won’t love it either.

You’ll note that my highest-trafficked posts from last year were nearly all pieces related to genre snaffus, mostly Hugo-related meltdowns, with the exception of “On Public Speaking While Fat” which had a lot of breakout potential because hey – so many folks have been there. This tells you two things 1) most of the people who “know” me are readers of SFF, so at best, I am “SFF books internet famous” 2) writing about what people are already talking about, or newsjacking, works. If you’re all about clicks, just weigh in on whatever internet meltdown is happening at the time, and watch the clicks roll in. If I was all about clicks, I’d be doing more political posts, or keyword-stuffed posts about Miley Cyrus or Justin whats-his-name or that Zoe person. But I don’t hate myself that much.

This is where the whole, “What are you writing this blog for?” thing comes up. People write for all sorts of reasons, and those who make a living via ad revenue measure success in clicks. But I’m not here to sell ads, or even sell books, really – a blog is not a direct sales channel. It’s about visibility and, to use the marketing term “thought leadership.” It’s also not just here to keep readers updated on what’s going on with the books, because I’ve had the blog since 2004 but didn’t publish my first novel until 2011. This is the place where I’ve come the last ten years to make sense of things in my own life, whether that’s my writing process, relationships, the death of a pet, a sexist slight, media trend, storytelling issue, or whatever. I enjoy writing about my experiences because writing is how I make sense of the world; I create narrative out of chaos. I’ve been doing this a long time in various forms, from journals to emails, and a blog was just a natural extension of that.

Clicks are nice; having an audience has been both a blessing and a burden. I suppose having an audience has helped keep me on my toes. I think a lot more about what I’m typing out here now. There are people who are more than happy to keep me accountable. But most folks come here because what I write is interesting, or makes them feel happy, inspired, or less lonely. And it’s that – the connection with other people, the solace that some of these posts can bring people – that’s been the unexpected result, for me. I like being able to set down complex feelings and ideas and transform them into narrative that compels people to act, or that tugs at heartstrings, or that inspires people to change their lives. But I didn’t… you know, actually expect that to happen. Yet I get fan mail from these people every month, and it’s pretty amazing, to know that words on a page – my words! – can incite action. It’s cool and… a surprisingly heavy responsibility.

Whether it’s inspiring or comforting or enraging and inciting 200 people or 20,000 people, writing here is something worth doing, for me. So I intend to keep at it.

In 2015 I’m wondering where this will all go, because if I keep writing at the level I am, or improve that writing (wouldn’t that be great??) then traffic is very likely to continue its upward trend. That said, traffic gained is also easily lost – we’re all one internet meltdown away from being a pariah, and I know that better than anyone.

I suppose we’ll find out.

Thanks to all of you for coming along for the ride. It’s been quite a wild thing, hasn’t it?

If you like what you’ve read here in 2014 and would like to support free essays here in 2015, you can donate here, or purchase my essay collection.