Who cares? On the importance of banter and character-driven narrative

I’ve been dutifully churning through episodes of Leverage, a sort of modern-day Mission Impossible where a bunch of thieves go about righting wrongs caused to individuals by The Man (big corporations). But though I enjoyed the concept, I just wasn’t getting into the show. I just didn’t care enough about the people involved in it. They didn’t seem to care much, either. I didn’t get any of them had anything better to do, anyway.

After the first episode, the show seemed to forget that it was about people, and just spent a lot of time engineering elaborate heists and double-crosses. I love a good heist as much as the next person, but if I’ve learned anything as a storyteller it’s that nobody cares how great your heist is if they aren’t emotionally invested in it, and they have no reason to be emotionally invested in it unless your characters are.

I asked Twitter if the show got any better, and Michael Underwood said it took him about six episodes to get into. This was way more episodes than I usually give a show, but because it wasn’t actively punching me in the face with overt sexism/racism/bullshit and I had no other shows queued up to watch, I figured I’d give it the six episodes and just put it on in the background while I was surfing the internet or doing line edits. I desperately wanted to fall in love with these characters the way I had the Firefly crew, but they just weren’t clicking – individually or as a team.

I know the moment the show shifted, because it was the moment I actually looked up from Twitter and gave the show my full attention. It was episode 5, and the team was working toward the retrieval of a child a family paid $120k to adopt and then had taken away from them. The hardcore thief of the group, about whom all we knew at this point was that she 1) blew up her house as a child because her dad was a jerk 2) liked money made some savvy observations about the kid’s behavior which confirmed he was an orphan. This was spoken the way it’d be from a foster kid who’d grown up in the system, and for the first time in 5 episodes I actually considered how, indeed, she’d grown up after blowing up her house. Ah, foster kid. This also ended up being the first episode where a character went off the plan for an emotional reason – the thief goes back to save all the orphans who’re being used as pawns in the huckster’s scheme, against the wishes of the team leader.

By the next episode, the writers had indeed remembered they were writing about people, not just heists, and suddenly there was witty character banter, and old enemies from their past showing up at weddings, and little emotional outbursts of affection for one another. Even my spouse, who’d been wandering in and out of the living room the last few days I’d been watching, actually looked up from his phone and watched the last half of the episode and said, “Wow. This is finally getting good!”

Here was the magical episode 6 where it finally all came together. It was almost eerie how abrupt the change was. It wasn’t like I watched 5 episodes and slowly started to care about them, it was all pretty much packed into an episode and a half of character banter and emotional decision making.

This shift got me thinking about the importance of character-driven narrative and banter in fiction. Very few readers are going to give you the equivalent of six episodes to get them to care about your characters. I often think the reason it took a lot of folks 50 pages to get into my first book wasn’t just because hey, weird world and bug-powered cars, but because it’s not until after the first 50 that the whole ragtag team of scoundrels comes together. That’s when you get to settle into the more familiar position of figuring out how they all love and hate each other. And oh yeah, do they let you know…

The setup for the other two books always started with figuring out the conflicts all the characters on the team had with one another – this person is Ras Tiegan, and this one hates Ras Tiegans; this one’s a drug user and this one hates drug users, etc. The snarky banter and often violent altercations and tension all sprang from those internal, character-driven conflicts I set up from the start.

I actually started to pay attention to character banter after attending Clarion  with Patrick Weekes (whose first book is out now, BTW), whose day job is writing for BioWare, most notably for the hugely popular Mass Effect series (BioWare games tend to be famous for the high quality of their character banter). At Clarion, he wrote astonishingly entertaining character banter that made you care. When I went back and looked at my own writing, I realized I was spending all my time trying to be a Serious Writer, and sorely neglecting all the humor and snark that makes life itself bearable. It was the revelation that maybe I should be spending more time figuring out snarky dialogue and fight scenes that eventually led me to write God’s War the way I did.

Sometimes we can get so caught up in something else – worldbuilding, or plot – that we forget about the people, and we forget that the world exists to make the people the way they are and the plot only exists because the characters move it. I did exactly this when I wrote the first pass of my latest book. I was so preoccupied with writing a well-plotted book (for once!) that I completely neglected character banter, then wondered why on earth it felt so flat when I’d so completely nailed the plot (finally!). Turns out focusing so hard on plot had given me a severe case of novel myopia. All I could see were the plot machinations, instead of the conflict and tension between the characters.

So I went back and teased out all the tensions between the characters. And I let them make fun of themselves, and each other, because let’s face it – you need humor most when the world’s ending. You can have the coolest plot, the coolest heist, in the world – in the universe! – but if your characters don’t care, or I don’t care about your characters, what’s the point? It’s just a bunch of strangers arguing about somebody else’s football team on the train.

What’s funny is that if folks do this right, you don’t notice it. You only notice it when it’s not there.  And then you just change the channel, or pick up another book.

Series and franchises work because you fall in love. I think one of the things we struggle with, as creators, is understanding what it is, exactly, that makes us fall in love. We think it’s about perfection, or beauty. But it’s not. It’s adversity. It’s passion. It’s watching somebody struggling to achieve something they care passionately about; somebody who’s not perfect at all, but who perseveres anyway. It’s watching people who are hurt, who are down, who get up again and go another round.

It’s people who care about the world, and each other.

Because if they don’t care about the plot, or what becomes of their comrades (good or bad) why should we? 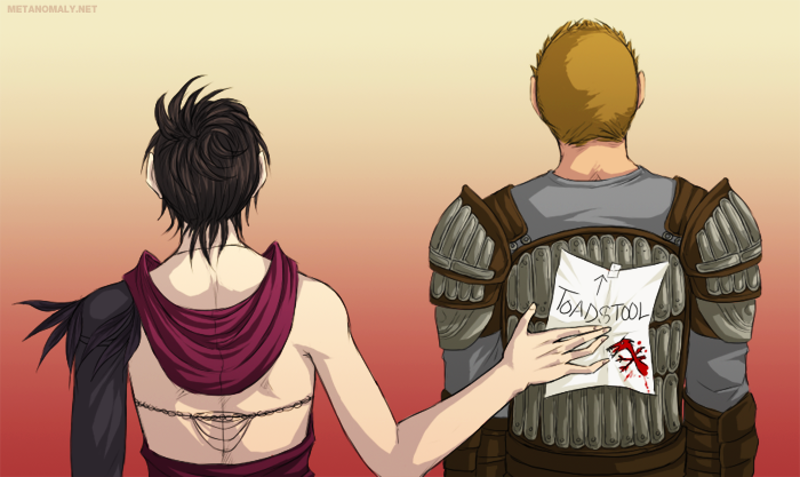