Why I Finish All My Shit

I’ve started a lot more books and stories than I’ve finished, and this is a problem.

Why? Surely, when a concept or story isn’t working, you should stop while you’re ahead, right?

Chuck Wendig had a post up today about all the reasons you should finish your work, but really, I can distill it down to one reason, and one reason only.

The thing folks don’t realize is that learning how to write a piece of work requires you to actively practice how to write the whole thing.

Writing five hundred great beginnings will not make you a great novelist.

This is the same with TV and radio scripts, direct mail pieces, web copy, registration pages, and all the other corporate writing I do. Folks are often astounded I can write certain pieces so quickly, and the reality is that the pieces I can write the fastest are the ones that I’ve practiced time and time again. The work I do less often – TV and radio, say – take a lot longer to put together. As with email, both of these forms are very specific, and have time limits that require word limits, too. The addition of imagery, with TV/web scripts is a huge change, too. As a writer, you want the words to do all the work for you, but when you have imagery, you want the images to do the heavy lifting. Just because I write novels and great web copy doesn’t mean I’m going to be a great radio writer – not until I’ve had the opportunity to write hundreds and hundreds of radio commercials, at the same pace I’ve been doing email and web copy. Radio and TV/web scripts take me a lot longer. With practice, when I understand the form, what I produce will not only take less time, but it’ll get better, too.

But I have to do the work first. I have to complete them. Not just the opening. Not just the sign off. Not people nattering in-between. Not just the two calls to action in the 30-second spot. The whole form, a complete 15, 30, 60, 120 script, over and over again.

What makes novels so difficult is that, unless you’re writing work that’s highly formulaic, set in a familiar sort of world, you’re not going to be writing hundreds of novels. The pulp and romance writers who do tend to be masters of the page-turner form. They know how to plot a book from opening to resolution blindfolded. They have mastered the form through active practice.

I don’t have the stamina to write hundreds of novels, and to be honest, I think I’d lose what makes my writing so unique if I tried to. I also realized early on that though I enjoyed writing, I didn’t have some kind of innate genius talent for narrative. Oh, I could come up with some bizarre scenery and funny dialogue and write a fight scene or two, but plotting out a book was agonizing.

So I’ve had to learn how to plot from start to finish. And that means finishing my shit. 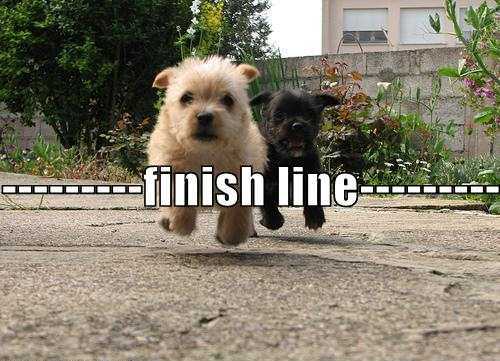 GOD’S WAR was my first published novel, but the ninth novel I’d ever written. It was also the best-plotted novel I’d ever written, so it’s no surprise that was the one that hit first (if you’re laughing at this, yes, well, imagine how “plotted” my prior books were). I was able to do this because I wanted a very simple smash-and-grab quest plot: it was a Holy Grail plot. Find the rogue alien. I added a snarking Firefly-like mercenary team on top of that, with their own internal conflicts and neuroses, and ended up with a book folks actually bought (with a little nudging and kicking here and there).

Writing the sequels, INFIDEL and RAPTURE, helped me – if not master, then at least become skilled at – this particular plot form. It was the old school, time-limited quest plot, and it worked perfectly for the world. Using the characters’ internal squabbles to drive the subplots and generate much of the conflict worked like a charm, and by the time I got to RAPTURE, I was able to write it fairly quickly. The quest for the Holy Grail (the alien, the rogue bel dame, the super weapon) drove the plot. All I had to do was fill the world with interesting characters and cool bugs and shit.

But when I finished RAPTURE I realized I wanted to tackle another form, and that was the form that had previously eluded me – the many-peopled epic fantasy with the twenty POV characters and secondary cast of thousands. That form, I knew, was going to be a lot of work. I’d already written about four or five completely different versions of MIRROR EMPIRE from start to finish, back when the magic looked more like drawing on the True Source, locusts still delivered messages, and the Dhai were called Drakes and were totally patriarchal.

Yes, you read that right: the final draft of MIRROR EMPIRE you read was actually the fourth time I’d burned it down and rewritten it from scratch over a 14-year period.

Epic fantasies are fucking hard, yo.

But if you’re like me, and you’re not a natural genius of form, you have to write and finish that shit, over and over and over again, before you write something saleable.

I guess I could have just written Nyx-like quest-novels forever, after figuring out that form, but what’s the fun in that? I want to write epic fantasies, sci-fi thrillers, space operas, ALL THE THINGS, and to do that I need to finish books with those forms over and over and over again, until I nail them. Then move on.

If the idea of writing a novel eighteen times freaks you the fuck out, I admit that this may not be the job for you. It’s true that not everyone writes like I do, but if you’re starting from behind, you need to understand that you’ll be working harder than a lot of your peers. I set a very high bar for myself, with very clear expectations for myself. Yes, I could be successful at this, but I’d have to work harder than other people. I actually found that idea to be supremely motivating, because it told me that no matter how successful other people looked by comparison, that was OK, it just meant I needed to work harder. The success of others, my peers, my colleagues, drives me as much as my own desire to stay in the game. YMMV.

Now that I’ve spent so much time working at plot, I’ve been applying those things I’ve learned into shorter fiction pieces, too. As with novels, writing great short fiction requires finishing shit, which was (believe it or not) harder for me than with novels. Short fiction isn’t my natural form. But by taking all this work and applying it to shorter stuff – and reading more short fiction, too – I’ve been able to finish more work, work that’s a far higher quality than the stuff I was doing ten years ago.

Narrative makes the world go round, and when you start to grok narrative, your career changes, let me tell you.

But to grok narrative, to understsand the novel form, to be able to approach a project and complete it faster, better, stronger, you need to finish inferior forms of it again and again and again, until you get it right.