In my continuing series related to what I actually make writing fiction every year (see 2016 here, 2014 here, 2012 here, and I know there are more, but can’t find them).

Here’s what that looks like in a nice pie chart: 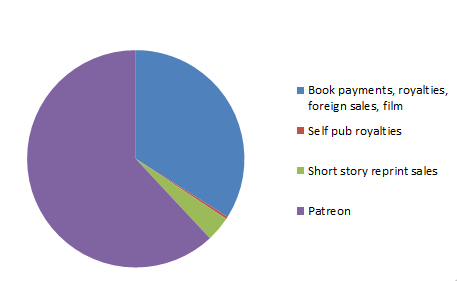 I tell writers often to “diversify your income streams” and this is why. Some years royalties and book payments and foreign sales are better than others.  There is more income that will show up on my actual taxes, including Amazon affiliates and Paypal donations, but I didn’t include those here (just as I didn’t include day job income) because I want this to be limited exclusively to writing income.

A couple of observations:

Patreon Saves the Day (But Don’t Count On It)

Patreon has been a godsend this last year, as I’ve been producing a short story every month, instead of every other month or so as I did last year. That said, the shitstorm at Patreon at the end of last year when they were going to up their fees by 40% for folks at the $1 tiers saw me bleeding fans from the platform. That experience reminded me again that this income – though provided by a large pool of 750+ fans, is still reliant on a third party system that could implode and fuck everything at any time.

As you can see, I don’t make much money in self-pub beyond Patreon. When I state this, many folks who make lots more there just tell me I’m doing it wrong, and hey! Maybe so. But it’s not where I put most of my time. Self-pub sales primarily come from one-off fiction shorts and collections, not novels. I like to include this revenue here, though, to point out that yes, I do self-publish some stuff, and yeah, no, it’s not a cure-all moneymaking scheme.

Don’t Get Too Excited About the “Film” Thing

Oh, I know you saw that “film” inclusion up there with the royalties bucket. As you no doubt realized, looking at the total it’s mashed up into, it’s not life changing at this point, just interest. I’ve had various Hollywood things stirring around for awhile now, but last year was the first year I made a little money on it due to some slightly more advanced interest. And that could easily turn into 1) Absolutely nothing 2) A little more 3) a lot more 4) Movies! Shows! Lottery tickets! This being H-wood, eh, I just sorta roll with it. Some IP is making the rounds, and people are getting interested, and that’s A+.

This is a Living Wage!

The last 2-3 years, especially with the addition of Patreon, I’ve been making what amounts to a living wage as a writer. That’s pretty cool…. granted, I still need health insurance, and even with my current plan, I have a $10k deductible, so subtract $10k from that just to start. Luckily I still have a day job, which is where that (useless) health insurance and all of my expenses and etc. come out of. The writing income, really, tends to get bucketed back into the writing career itself. I spent some obscene amount last year traveling to various conventions (hence paring down this year), as well as swag, patreon rewards, and various other related business supplies (printer ink is $130 a pop. WTF?). My goal, of course, is to pay off my debts, move to Canada for affordable healthcare, and shift to writing full time – supplemented by freelance income – in the next few years. But, you know – I’m not holding my breath.

One thing I’ve learned about this business is that it’s feast for famine. I currently have $8 in my account and three credit cards maxed out… in the next week or two, however, I will have my day job paycheck, $2600 from Patreon, and another $5k payout for Legion. When I finish THE LIGHT BRIGADE, I’ll get another $10k here in the next month or so. Clearly I’m bad at managing these lean/flush times, and that’s something I’m working on getting better at. All of those payments will go toward aforementioned credit cards, taxes, and immigration fees, and then… it’s all gone again. Tra-la. The taxes in particular are a killer in the writing profession. Sigh.

What does this all mean? Well, it means that Patreon both makes being a full-time writer a viable future if I severely cut down on appearances and other expenses and get all of last year’s convention debt paid off. That said, relying on Patreon for 3/4 of my writing income… is not a good business strategy. Take out Patreon and I’d be making like $18k – which, again, with a $10k deductible is not even a poverty wage.  I am seven years into this profession and what I’m making on traditionally published work year to year is less than a minimum wage job. Soooo…. keep you day job, people.

Once I clear out LIGHT BRIGADE and finish BROKEN HEAVENS I’ll be working on some new projects, for which I have high hopes. LEGION in particular has done very well, all of my work has earned out, and I’m doing well maximizing what I’m paid for short fiction. Every story is a piece of IP, and thinking of it like that does help me manage it.

Anyhow, folks – that’s what one award-winning author who’s been in the game the last seven years is making. Yes, I should me making a shit brick more (every time I do these one of my male colleagues emails me and is like, “You are really underpaid. There are people selling less who make way more.” And I’m like yes… yes, I know. I’m working on it). We are all working toward leveling up and breaking out. I’ll get there. But if you’re struggling, just remember: there’s often a lot of years of slog ahead. You are doing fine if you are slogging.

All we can do is be honest, and flail onward, and keep this shit real.