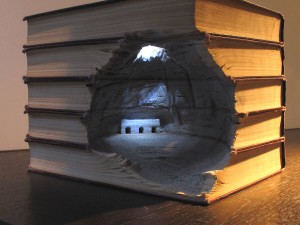 I was reading a well-known science fiction author last night and found myself repeatedly bumped out of the story by all the techno-babble. I’m not averse to techno-babble, mind, it’s just that I didn’t buy that this POV character viewed the world through techno-babble glasses. If you’re staring at a sunset, it’s highly unlikely that you’re thinking all about the technology that allows you to see it, or the different gases and substances in the atmosphere around you, unless that’s your job or your passion or stepping out into said environment is anything other than routine for you.

This is the trouble I have with a lot of science fiction novels in particular, but fantasy does it sometimes too. It’s this obsession with details that the POV characters really wouldn’t 1) know or 2) care about.  When I access the Internet, I’m not thinking about how the Internet was created, or where the information is stored, or even the millions of people who create it. I’m just looking for information. Or checking my email. When I use my phone’s navigation system, I’m not thinking about satellites or Google vans mapping streets, I just want to get where I’m going. There is nothing that pulls me out of a book faster than people interacting with everyday technology who don’t do it like real people. Granted, if you’ve got a molecular biologist or geologist as your protagonist, fine – they will see the world a little differently. But your backcountry merchant doesn’t give a crap about how her suit keeps her from getting frozen or roasted – she just cares that it works.

Back when I first got started writing, people told me I wrote “sword and sociology” stories. To some extent, I think that’s true. I’m far more interested in what these technologies and places will do to people, and how society and social mores will change because of them, than I am interested in how said technologies work. I don’t read fiction to figure out how to construct a light bulb. That’s what nonfiction books and the Internet are for. And let’s be honest, here – a lot of SF is just handwavey stuff anyway. They don’t really tell you how a thing works that isn’t a real thing – they tell you how it might or could work. And you know? I just don’t see it as my job to tell a reader how something works. If they want to build one that works that way, great! But again, if I knew how to make a teleportation device, I’d make it myself, patent it, and travel around the world throwing money at things.

What’s worse is when you’re not only getting jerked out of a story by all the – “As you know, Bob, the gamma ray Xbox malfunction causes abrasive discharge to the calibrated death ray at inopportune times. This is because of the way magna gas pods are hooked up to the elevated pitch level.” – but you’re also served up some wholly boring, 20th-century type people who have so clearly not been shaped by their environment. It’s like the author doesn’t even question how social relationships and social mores might change in these extreme environments. Everyone just goes on expositing. I could pick up far too many of these characters and set them into a skyscraper in New York and they would fit in and function just fine.

It’s wrong for me, at any rate, and the type of fiction I’m interested in. I want to know what all this stuff does to the actually people using it, living with it, living in it. Stories, for me, are still about people. Not just the science they do or plots they unravel, but the people they’re fucking, the phobias they have, the passions they act on or subvert, and how those things are regarded by the wider society.

I realize this type of people-centric fiction isn’t for everybody. Sometimes people just want long, rambling extrapolations of how current nanotube construction can be applied to hypothetical future uses. But I don’t need the windy guts of that explanation in order to get the “gosh wow cool” factor from my fiction. Simply knowing that there’s something that does a useful, strange, and extraordinary thing is enough. I often don’t want to know *how* it works. Honestly, that takes some of the fun out of it. I want to think about why and how it works on my own. And most importantly – I don’t want some random tangent about how Future Binoculars work to get in the way of the actual story. You know, the story that’s about the people who *use* these things.

I realize this is a very personal aversion to specific types of fiction and approaches to science fiction in particular, and it’s not everybody’s cup of tea either. But it’s what the world does to the people, and how the technologies that they employ shape and change them – rather than the technologies themselves – that really interest me.

(It appears I’ve ranted about this before. This is why I don’t read much straight-up SF!)